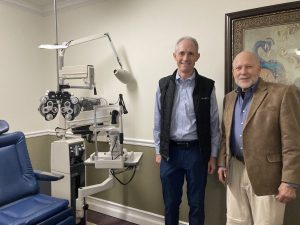 REBECCA HAZEN/Dade County Sentinel
Dr. Graham (right) is retiring from optometry. He has been an optometrist since the late 1970s, and has practiced in Trenton since 1980. Dr. Denis McDonald (left) will take over the practice when Graham retires at the end of this month.

Optometrist Dr. Leon Graham is retiring after over 40 years of service in the Trenton area, and his associate Dr. Denis McDonald will take over the practice.

Graham has been practicing since the late 1970s but did not originally plan to be in the optometry field.

He started out as a brick layer while in college and was also an industrial art school teacher.

“One of my students cussed me out in class. The principal in charge of discipline asked if I would accept an apology because he was one of their star baseball players and there was a big game that night. I said, absolutely not. And that rubbed me the wrong way,” Graham said.

After leaving the teaching profession, he went back to being a full-time brick layer for a few years. It was then that his brother, who is a dentist, convinced him to go to school to become an optometrist.

He graduated with honors from Southern College Of Optometry in 1978.

He worked with the late Dr. Hawthorne in East Ridge, Tenn., for the summer because he didn’t have a license yet. Graham took both the Georgia and Tennessee board certification tests.

The practice offers routine eye exams for glasses, and contact lens fitting. They also offer health exams, where the pressure is checked in the eye to make sure there is no indication of glaucoma.

Graham recommends an eye checkup once every year, and possibly additional follow ups if someone is diabetic or if they have glaucoma.

There have been many changes in the optometry field and advances in technology since Graham has started practicing.

“The biggest thing is cataract surgery. I don’t do that here, but it’s a related field. Sixty years ago, after cataract surgery, you’d have to wear lenses about as thick as Coke bottle bottoms,” Graham said. “Now, they are putting lenses in the eyes, called intraocular lenses.”

Contact lenses have also changed too. There used to be only two brands of soft lenses, and now there are many more. There also used to be no soft lenses for astigmatisms. Graham says he sees less people use hard lenses.

“We also have an auto refract, an electric device that determines the power that is needed for glasses. Prior to that you needed a scope and a light to shine in the eyes,” Graham said.

After he retires, on March 31, Graham plans to travel, and to help his brother fix up the home that their mother grew up in. He also plans to continue to work one day a week for a year.

“There are mixed emotions. There will be plenty to do,” Graham said.

Dr. McDonald will take over the practice once Graham retires. Graham and McDonald have worked together for about 15 years.

“He and I practice similarly. He is a very personable individual. We have similar philosophies of taking care of patients. The patients are the most important. If you treat a person the way you want to be treated, usually things will work out,” Graham said.

“I don’t want him to retire at all,” McDonald joked. “It’s been great. It’s been easy working with him. We don’t seem to butt heads at all.”

McDonald hopes to expand the practice, and to continue to bring in new equipment.

“We’re staying busy with the two exam rooms, and it would be nice to have maybe three or four. We want to modernize and stay up with the times. We want to try to maintain what he’s done, as far as patient care and customer service,” McDonald said.