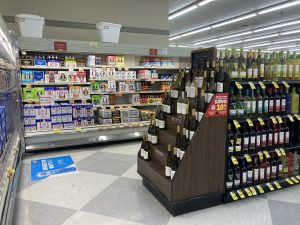 REBECCA HAZEN/Dade County Sentinel
Sunday sales of malt beverages and wine in the city limits is now legal. Retailers, such as Ingles, pictured, will now be able to have Sunday sales between the hours of 12:30 p.m. and 11:30 p.m.

City of Trenton Board of Commissioners voted on and approved the Sunday sales ordinance, to be put into effect immediately, during the meeting on Monday, March 14.

Retailers of alcoholic beverages and wine in the city limits will now be able to have Sunday sales between the hours of 12:30 p.m. to 11:30 p.m.

Establishments serving alcohol can now serve customers between the hours of 12:30 p.m. and midnight on Sunday.

City voters voted for Sunday sales during the November 2021 election.

The new ordinance, and other city ordinances can be viewed online at trentonga.gov.

Also, during the meeting Commissioners approved the purchase of three Ford Explorers for the Police Department for $53,180.40 per car, which includes $12,500 for lighting equipment. The total for all three vehicles is $159,541.20.

The commissioners also discussed the possibility of purchasing Simbli Board Management Software, for $2,750, or $229 a month. Meeting agendas, and documents that the commissioners reference during meetings will now be available online, and the public would have access.

Trenton Mayor Alex Case noted that the County and the Board of Education already use Simbli for their documents.

“It is user friendly. Everything would be visible and available. We will be using our laptops, and it will be less paper,” Case said.

Case asked the commissioners to look at Simbli on both the County and Board of Education websites, before voting to purchase the software.

Commissioner Terry Powell reported that the community center was rented for 80 hours during the month of February. Animal control had 10 work orders. Powell noted that part-time employees are needed for the pool, one as a lifeguard and another to be on in charge of the concession stand. A part-time employee is also needed for park maintenance.

Commissioner Monda Wooten reported that the Street Department has been working on equipment to get it ready for spring. Wooten noted that the department is looking for a new part-time employee, too.

Commissioner Mike Norris reported that the police department had 88 calls for service for the month of February. Total fines collected for February were $13,902, for a total of $29,893.50 for 2022.

Commissioner Lucretia Houts reported that the Sewer Department had 18 underground locates, six emergency locates, nine sewer calls, and two sewer line inspections. There were six remodels, one site review, and one property review. The fire department responded to 10 fire related calls, four accidents, seven medical, 16 standby, and were dispatched and cancelled in route to 68, for a total of 105 calls.

Mindy Haworth, Dade County Public Library Manager, reported to the commissioners that the library employees are currently doing inventory of what has circulated and what has not circulated.

“Our goal is to bring new books in and increase the availability of new titles and new authors,” Haworth said.

Haworth also noted that the Ready to Read weekly program is growing, and there was a record 23 children at one of the recent events.

Jane Dixon with Alliance for Dade thanked Mayor Case for being one of the speakers at the recent Lunch and Learn event, which was sponsored by the Alliance.

Dixon also asked the commissioners, and other citizens to consider participating in the upcoming career fair at the Dade County High School on April 5.

After coming out of executive session, Wooten asked the other commissioners to consider raising City Clerk April Keith’s wages by an extra $1 an hour. Commissioners approved the increase.

“Since she has been here, she has been certified and she’s going to have a new employee coming on soon that she will be responsible for,” Wooten said.

The next City of Trenton Commission meeting will be April 11.