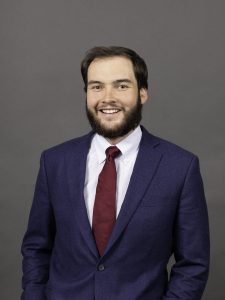 Republican Colton Moore, 28, from Trenton, has announced his intent and has qualified to run for the Georgia District 53 State Senate seat.

Previously, Moore represented the 1st House District in the Georgia House of Representatives from January 2019 to 2021. He ran for the State Senate seat in 2020, but incumbent Jeff Mullis won.

Moore has been a life-long, fifth generation resident of Dade County. His father owns an excavating and trucking company, which he worked at during the summers. He went to college at the University of Georgia, to major in international affairs and political science.

While he was in college, he worked part-time as an auctioneer selling cars. He won an auctioneering contest, which then gave him the opportunity to be a heavy equipment auctioneer in Ireland, England, Japan, and Philippines.

During that time, Moore felt like he wasn’t getting the representation that he and other constituents in the district deserved.

Moore continued, “I went to Atlanta, not with mindset of creating a career or spending a long time there, but with the intent to represent the values of north Georgia.”

Moore believes that Senator Jeff Mullis did not appreciate the way he liked to legislate.

“Through his large coffers of money, and his influence, he decided to run two people against me for that seat, a seat that had not gone challenged in nearly 10 years. That’s what spurred me to run for State Senate,” Moore said.

However, COVID-19 happened, and he wasn’t able to fully campaign. This time around, Moore noted that he is jumping back into the political race because of all the people that supported him during the last campaign.

“This is a new era in north Georgia politics. Someone who has had his hand in local politics for the last 22 years is suddenly not running again,” Moore said.

Moore believes that one of the most important issues for the 53rd district, which includes Catoosa, Chattooga, Dade, and Walker Counties, is reducing the tax burden.

“If you live in the metropolitan area of Atlanta, you can’t really see a difference. Here in northwest Georgia, we’re competing against Alabama and Tennessee. Tennessee doesn’t have any state income tax. We have an ad valorem tax when it comes to new vehicles being purchased. We need to be able to reduce the tax burden,” Moore said.

Moore also said that, related to the tax burden, there are film tax credits in Georgia.

“Film tax credits subsidize the film industry, costing our state roughly four percent of the total revenue of the budget. This is something that needs to be addressed, “ Moore said.

Also, voting integrity is important to Moore. He does not want to see any Dominion Voting Systems machines used in future Georgia elections.

“The last election, folks were getting the printout with a barcode, but it wasn’t showing them who they had voted for,” Moore said.

In addition, Moore would like to see stronger gun rights legislation and transgender athletes banned from school sports. He also hopes to be a member of the Transportation Committee.

Moore believes that a strength of District 53 is that it is one of the most conservative districts in the entire country.

“The values of liberty and freedom in northwest Georgia are held to a much higher standard and are much more steadfast. It’s essential that whoever gets this seat, legislates with that in mind,” Moore said.

Moore also said that there is an abundance of resources in the area including three interstates running through the district, and two different railroads. The area is geographically located a day’s drive away to over half of the major cities in the U.S.

“We are primed for great industry growth,“ Moore said.

Moore believes that he is the better candidate than Steven Henry, who also recently announced his intent to run for the State Senate seat.

“I have a proven voting record that puts me in the top 10 most conservative legislators in Georgia in modern history. I have a standard of principals that I legislate on. Unlike my opponent, I will never be a transactional politician, as in one who does something in exchange for something else,” Moore said.

Moore also said that he fully understands agricultural interests, and he believes that his rural background will help him better serve the constituents.

The election is May 24. The elected official will start their two-year term in January 2023.
For more information, visit coltonmoore.com.