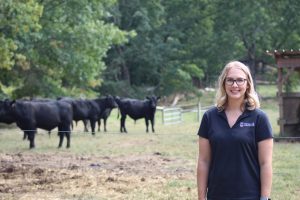 Sarah Dyer has recently been named the Georgia Cattlemen’s Association Agent of the Year. Dyer says that cattle is her passion, and all of her work is tied to the industry.

Sarah Dyer’s passion is the cattle industry, and her dedication shows with her recent recognition as the Georgia Cattlemen’s Association (GCA) Agent of the year.

Dyer’s passion for the industry touches every aspect of her life, including her job as Dade County’s UGA Agriculture and Natural Resources Extension Agent, being a member of both the state GCA and local GCA chapter, Tri-State Cattlemen’s Association, and the business she co-owns with her husband Jeremy Dyer, Dyer Livestock Beef.

Dyer’s title as Agent of the year was awarded at the 60th annual GCA Convention in Savannah.

According to georgiacattlemen.org, “GCA is the state cattlemen’s association whose mission is to unite and advance the cattle industry in Georgia through legislative representation, producer education, market development and community events.”

“The state organization represents farmers across the state. They are the voice for us. They are also the leaders in making sure that we are informed in our local communities,” Dyer said.

The convention provided networking opportunities, in addition to there being business meetings, educational classes, and a trade show.

Dyer said that she knew that she was going to receive the award, because the Agent of the Year is a title that can be applied for. She was encouraged to apply by a committee member, who noted that she did a lot at the local, regional, and state levels, and would be a great candidate.

“It was an honor. The cattle industry, and serving our local cattle producers, is near to my heart. It is something I am passionate about, so to receive an award that recognizes those efforts is special to me,” Dyer said.

Dyer has been involved with the cattle industry her whole life, noting that her father raised cattle.
She pursued a degree in animal science, with a focus on livestock and cattle production, at the University of Florida. At the same time, she had her own cattle herd.

“I focused my education around the cattle industry both during undergrad and at graduate school. I dove into the beef product side of things and looking at consumer preferences. That is what lead me into loving the end product in the consumer relationship,” Dyer said.

Dyer spoke about the goals that she would like to achieve through her work.

As an agent, she has put together the D.A.D.E Grass Class programs, which has focused on forage-based education. About 90 percent of the attendees are cattle producers, so in the future, she would like to offer a cattle-focused series.

In addition, Dyer is also involved with the GCA’s Young Cattlemen’s Council, as the Region 1 representative. She would like to step up into a leadership role to help build her network and involvement in the industry.

There have been changes in the cattle industry, with current trends that need to be watched for the future.

“We have seen, in agriculture, the average age of farmers is getting older. We need a new generation of farmers to come along and replace those that are feeding our world. The biggest factor is input cost. It is nearly impossible these days to buy land and have the cattle production pay for that land plus be a profitable business,” Dyer said.

Alternative, non-meat products have also been trending in recent years, but right now there is no effect on the cattle industry.

“It is on the meat and beef industry’s mind and something we are paying attention to, but right now meat consumption and demand is at an all-time high,” Dyer said.

Dyer noted that her business, Dyer Livestock Beef, focuses on all aspects of beef operation from beginning to end.

“We have the momma cows that have the calves. When we wean them, we are growing them on grass. Then we bring them up toward the end of their lifetime and we are providing them grain. Our cattle are grass fed and grain finished. We get them harvested at a local processing plant that is USDA inspected. We hold licenses that are required for us to be able to sell the product to the consumer,” Dyer explained.

The Dyers have their own Dyer Livestock beef mobile trailer, which enables them to sell products at different farmers markets, and they can set up their trailer at any location and event.

The business will have a website soon, located at dyerlivestockbeef.com. They can also be found on Facebook. Dyer Livestock Beef will soon be able to place an order for local pick up, as well as ship small packages.

“There is a term that says, ‘No farmer, no food.’ We like to switch that up to ‘Know your farmer, know your food,’” Dyer said.