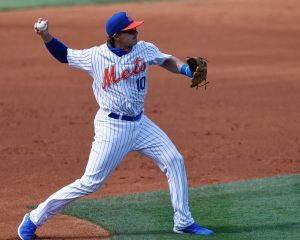 Contributed photo
Nicholas “Nic” Gaddis, from Dade County, is playing with the Brooklyn Cyclones this season, a High-A affiliate of the New York Mets. Gaddis was drafted in the minor leagues in 2019. He plays both catcher and third base infielder positions.

Nicholas “Nic” Gaddis, is currently at spring training in Florida, gearing up for the Minor League Baseball season with the Brooklyn Cyclones, an affiliate of the New York Mets.

Gaddis, 25, was born and raised in Dade County, and went to Jacksonville State where he played baseball all four years. He was drafted by the New York Mets in the 16th round of the 2019 MLB June Amateur Draft.

As a rookie, he played a short season his first year, but then the COVID-19 pandemic started. He didn’t get to play in 2020 and played his first full season in 2021. Gaddis is a catcher, and an infielder, primarily at third base.

“It’s always been a dream of mine to go play professionally. I remember being a kid, around eight years old, and I told my dad that I wanted to play professional baseball. My dad has always said, ‘You got what it takes.’ That stuck with me,” Gaddis said.

There are multiple levels in the minor leagues. Triple A is the highest MiLB level, and then there’s Double A. Next is High-A, Low-A, and then the lowest level is Class A short season.

“Now we are about to transition into the spring training aspect. For the first couple of weeks, it’s about getting your feet back under you. We go through a bunch of drills, batting practice, and catching bullpens. About halfway through the month of March, it will turn into a controlled environment to be able to prepare for the season,” Gaddis said.

The teams will travel to other team’s spring training locations, where they will play a series of scrimmage games.

The minor league baseball season is a little shorter than the major league season. Opening day starts April 8, and the season ends the second week of Sept.

According to Gaddis, the minor league schedule has changed since the pandemic. Games are more spaced out now, with off days in between series.

“It used to be, you could play for a whole month straight and not have a day off. Now it is more structured,” Gaddis explained.

Gaddis says that he enjoys being able to travel to new areas to play different teams, and he enjoys the opportunity that has been given to him. His goal for the upcoming season is to play well enough to be promoted to a new team, and hopefully one day make it to the ‘big leagues.’

“Baseball has always been what I’ve wanted to do. Just ask my wife. She’s asked, ‘What’s after baseball?’ and I say, ‘Baseball.’ It’s always been my driving factor. I am very grateful for the opportunity, for my abilities and for the people who have helped me get there,” Gaddis said.

Gaddis continued, “It’s cliche to say, but it’s fun. I am fortunate to be in the position to still get to play. I take it as it comes, and don’t take anything for granted. Whether it’s my last day on the field or not, I just enjoy it.”