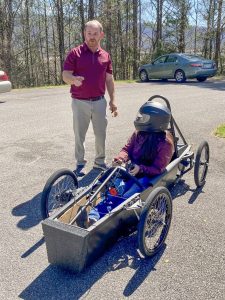 REBECCA HAZEN/Dade County Sentinel
Board of Education member Jennifer Hartline prepares to test drive an electric car, as teacher Jimmy Gallman gives her pointers. The Board of Education had the opportunity to visit different classrooms as part of a school tour.

The Dade County Board of Education held a meeting at Dade Middle School on Thursday, March 10, in an effort to meet and interact with both students and staff.

Board members heard from Middle School Principal Michelle Beeler and students about the programs, classes, and events that the school has.

“We want to show you just a tiny glimpse of the wonderful things going on here,” Beeler said. “I do not think you could find sweeter kids anywhere. One of my guiding beliefs as a school leader is that students should have a voice. I try hard to make sure that students are heard, and they have lots of avenues to express themselves.”

Webster spoke about the different academic opportunities for students, including gifted and accelerated classes, and engineering classes and programs, such as Green Power and NASA HUNCH.

“We are the only middle school in the nation to have a partnership with NASA,” Webster said.

Webster also read her essay from the Optimist Oratorical Competition.

“Optimism is when you see the world in a positive light. Instead of looking at the glass as half empty, try looking at the glass as half full. Believe me when I say that I know that being optimistic isn’t something we pay attention to. Either we don’t realize that we are being optimistic, or we don’t think about trying to be optimistic. My advice would be to pay attention to your mood and mind set. Don’t make others suffer just because you are pessimistic,” Webster said.

Chaney explained the house system at the Middle School. The students are divided into four houses, the panthers, darters, wildcats, and yellow jackets. Students can earn points for their houses.

“We have real world experiences like creating advertising for our local Tractor Supply,” Chaney said.

Bell spoke about how the students at the middle school have a say in decisions. There is a student council, a student advisory board to the principal, and student ambassadors.

Bell also told board members about PBIS rewards, which students can accumulate and then redeem for prizes.

“We get points for being ready, respectful, and responsible,” Bell said. “Each student has a PBIS Account.”

Wylie, the first-place winner in the Optimist Oratorical Contest, read her speech to the board members. She will continue on to the regional contest.

“Staying optimistic in challenging times has affected my life in many ways. I have experienced many difficult things throughout my life. Sometimes, optimism feels like the only thing there is to hold on to. One example of this in my life is when I lived in China for four years. This was a challenging experience for me. None of my family could speak Chinese. Adjusting to life in a foreign country was difficult, but my parents were amazing role models for me, and always stayed optimistic and supportive of me and my brother,” Wylie said.

“This was just a tiny glimpse of the magic that happens at DMS,” Beeler said after the students spoke. “Our staff gets full credit for that. We have an amazing staff. They go above and beyond every single day.”

Afterward, the board got a tour of some of the middle school buildings and classrooms. The tour included a stop at the gym, where students were playing a game of kickball, and to see the weight room. The board members also went to the PAES Lab, where they learned that students work on different tasks that they would have to do during real jobs, such as reading and writing down barcode labels.

A highlight of the tour was going to teacher Jimmy Gallman’s class, to see the electric car that the students are building, part of Green Power USA Foundation. The car will be entered into the 2022 Greenpower USA National Finals at Talladega Superspeedway on May 21. Board member Jennifer Hartline was invited to drive the car around the building.

The regular monthly Board of Education meeting at the Central Office will be Monday, March 28.