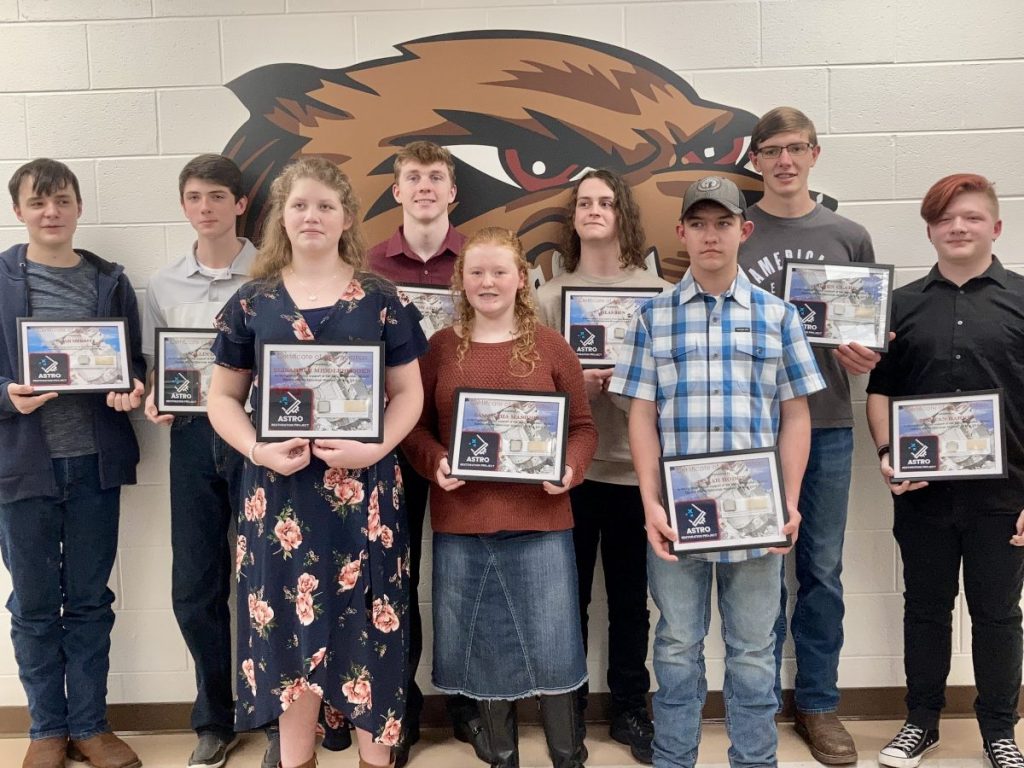 REBECCA HAZEN/Dade County Sentinel
NASA HUNCH students were recognized at the Dade County Board of Education meeting for their Astro restoration project. The students honored were in front, from left, Elisabeth Middlebrooks, Samantha Mashburn and Isaiah Hodge. In back are Noah Merritt, Collin Gray, Max Howard, Silas Bien, Aiden Clark, and Tristan Harris. Students Crews Page, Evan Avans, and Elijah Barron were not present at the meeting.

Dade Middle and High School students were recognized and honored for their work with NASA HUNCH during the Monday, Feb. 28 Board of Education meeting.

Shenea Hill, Director of Career and Technology Innovation, and Bob Zeek, of NASA HUNCH spoke to the board about the program, and the project that the students have recently completed.

“Our students start out designing and 3D printing in elementary school. Students in middle school advance to using industrial level design programs and equipment while participating in the NASA HUNCH program. The students then take their knowledge and confidence into our high school program. The high school offers the students even more advancement in 3D printing, by using additional materials,” Hill explained.

Hill continued, “They have developed multiple collaboration projects, including the Astro restoration project. This project will be displayed in the Smithsonian Museum in Washington, D.C.”

The students recently completed the Astro restoration project. The Astro 1 Space Telescope flew in 1988. It took the first UV Spectrum, Gamma ray and X-Ray images of all the planets and nebulas. It was the predecessor to the Hubble Telescope.

“It flew and then it came back. It was decommissioned, taken apart and sold for scraps. Most of the parts have been captured, and they were put back together,” Zeek said.

Zeek continued, “The 3D printers couldn’t interpret the old drawings, so we had to have 3D parts made.”

Zeek noted that NASA HUNCH was started in 2003 and is located at 452 schools in 47 states.

According to Zeek, the newest NASA HUNCH program is a health science program.

“We did a pilot program this year in a health care class, and they picked mental health. We got great ideas. It was such a hit,” Zeek said.

A sewing class may be started for the program soon. Zeek noted that sewing is important because everything that goes up to the International Space Station goes in quilted bags.

“The whole purpose of this program is to inspire the next generation, which is our youth right here,” Zeek said.

The students in the NASA HUNCH program were awarded a plaque during the meeting. On the plaque was an Astro restoration project patch, and a piece of Velcro that was flown in space.

“I am so excited about this project. I am so pleased about the work you have done,” Hill said to the students.

Also, during the meeting, the board approved a resolution to introduce redistricting. Dade County’s four districts were found to be unproportionate after the latest census results. The Reapportionment Office in Atlanta drew a new map to make it more proportionate.

‘When the board approves this resolution, we will send it to Representative Mike Cameron. The legislature will have to take action on it,” Superintendent Josh Ingle explained.

Tonya Gatlin CTAE Director, and mechatronics teacher Mike Beeler requested to purchase a mechanical drive system, which includes a mobile workstation, motor control unit, mechanical transmission components, specialized tools, performance measurement tools, and more. The board approved the purchase, which will be paid for with SPLOST funds. The total cost is $20,030.

“It takes a collaborative effort of all of these organizations working together to help improve our outcomes,” Ingle said.

The board went into executive session. The board approved the hiring of Brent Cooper as the Dade County High School principal for the upcoming school year, the hiring of Michelle Brooks as a substitute for school nutrition, and Caitlyn Hicks and Toby Smith as substitute teachers. The board also approved the retirement of Bill Tillman, and the resignations of Dr. Catherine Turner, Dr. Jeff Scott, Kayla Brown, Troy Stevens and Dora Lea Branch.

The next Board of Education meeting will be March 28.