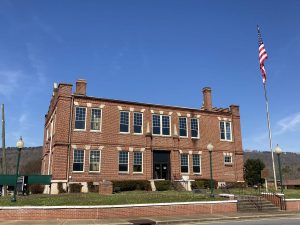 REBECCA HAZEN/Dade County Sentinel
The restoration of the Dade County historical courthouse is underway. The County Commissioners heard an update on the project from Jamey Blevins, from Blevins Construction Management. Bids are currently being accepted for phase one work.

Jamey Blevins of Blevins Construction Management, Inc., presented information about the historical courthouse project to the Dade County Board of Commissioners during the Thursday, March 3 meeting.

According to Blevins, mechanical, electrical, and plumbing bids went out Monday, Feb. 28, and are due back on March 14.

“By the next meeting will be able to make some recommendations on who we think is the most competitive complete bidder,” Blevins said.

Blevins continued, “There will need to be more discussions as to what we need to incorporate into the first phase of work. My recommendations have been to get the site storm sewer work done.”

Blevins said that they are reaching out to everyone for bids, including local companies.

Also, requests for tours of the courthouse have been received, and they are in the process of setting those up.

Blevins also showed the Commissioners the web-based project management system that they use.
This is where we warehouse everything. The drawings are already on here. When we get the contracts, they will be visible on here. The commissioners can have access if you want,” Blevins said. “This is a real time running situation of where the project stands at any given time.”

“In the previous year, in our four-county area, which is Catoosa, Chattooga, Dade, and Walker, we had $306 million in direct investments, and over 900 new jobs created,” Hogg said.

According to Hogg, two of the biggest investments were an expansion of Roper Corporation, the largest employer in Walker County, and the McLemore project.

“We have had a successful year for grant funding. So far, we are up to $37 million in grants received from the state in our four counties. $21 million of that is in water and sewer grants, and additional $16 million is in broadband grants,” Hogg said.

In the past 10 years, since 2012, the area is up to $1.252 billion in investment in Northwest Georgia.
“I feel very positive about the future,” Hogg said.

Also, during the meeting the commission approved many proclamations for the month of March, including Intellectual Developmental Disabilities Awareness Month, Save Your Vision Month, Sexual Assault Awareness Month, and Social Worker Month.

The commissioners approved the reappointments of Tommy Bradford to the Department of Family Children Services Board, and Rex Blevins to the Joint Historic Preservation Commission. Kevin Smith was appointed to the Special Use Permit Board for an unexpired term.

The Commissioners also approved a SPLOST request from the Dade County Water and Sewer Authority for the Wayside Lane water line project to install 165 feet of six-inch water main and install a fire hydrant at Wayside Lane on Lookout Mountain. The cost is $21,602.88.

Commissioner Phillip Hartline proposed an intergovernmental agreement between the Board of Education and Dade County for recreational services at the Dade County Sports Complex.

According to Hartline, the middle school does not have its own fields. The Sports Complex would rent the fields to the school for middle school softball and baseball for $5,000 a year. The commissioners approved the agreement.

There will also be a sale and/or disposal of county capital equipment as declared surplus property.

“We have a few items for sale. You will be able to go on our website to see everything that’s there. It will be easy to bid on it,” County Commissioner Ted Rumley said.

The commissioners informed citizens that there is a survey available to take for the Trenton-Dade County Joint Comprehensive Plan. There will be paper copies available and will be available online.

“The more participation the better. If you are willing to put a few in your shop, let us know,” County Clerk Don Townsend said. “It helps Northwest Georgia Regional Commission assist us in developing the future plans.”

Commissioner Lamar Lowery reported that EMS had a total of 217 calls for the month of February. The Fire Departments had 250 calls, and the police had 2,321 calls.

Lowery also reported that there were over 100 new addresses added for new homes in the county in 2021.

“We had 10.3 inches of rain in February. Half of that was last week. We had 16 inches since the first of the year. Middle school played ball on March 1 and 2. He’s working on those fields and is getting it so they can play ball and not have as many rain outs,” Hartline said.

Hartline also noted that there were 26 electrical inspections for the month of Feb.

Commissioner Robert Goff reported that SPLOST revenue is the highest it has been since July of 2008.

Goff also commended the student athletes at DCHS, noting that many teams and individual students have gone to state championships.

Commissioner Melissa C. Bradford reported that the transfer station had 920 tons for the month of February. There were 166 work orders for the Road Department, mainly due to the high amount of rainfall last month.

Bradford noted that Tire Amnesty Day was approved for Saturday, May 7 from 8 a.m. to 2 p.m. The rain date will be May 14. This is a chance to get rid of scrap tires for free. Dade County residents will be able to bring five tires per household. No large truck or tractor tires will be allowed.

Rumley reported that he met with Georgia Department of Transportation, concerning a water issue on the mountain coming up Hwy 136.

“It is causing a lot of erosion, right around Lilly Lou’s. The DOT area engineer came in and he is researching to see if there is anything they can do about it. I will have a report about that next meeting. It hasn’t affected the road though, that road is in great shape,” Rumley said.

“The school board moved forward on the districting. It won’t take effect until after the next election, so we still have time. This is something we will be discussing between now and the next meeting,” Rumley said.

“We know the lay of the land. They’re looking at a flat map. They don’t know what they’ve just done,” Lowery said about the proposed redistricting.

“The relationships have already been built. You have a relationship with the commissioner and then all of a sudden, you’re in a different district. That’s my concern,” Bradford said.

Rumley also noted that the county is selling property on Back Valley Road that’s about 36 acres. There will be an auction of the property on April 15.

“We had surveyors come and it’s marked. There are numbers on those tracts of land. They go from five to nine acres. If you’re interested, or have any investment desires, it would be good to look at this property,” Rumley said.

“This is an incredible program. We are now in our fifth week. We have five families that are coming. They are getting fed. We give them books to start their home library and we have a storyteller come and read a story,” Haworth said.

Haworth noted that the library is partnering with Dade County Schools for a Newbery Book Reading Challenge, in honor of the 100th anniversary of the Newbery Award. Students are challenged to read a book on the Newbery list and take a picture of themselves with it and post the picture to Padlet. Ask at the library front desk for Padlet information to log the books. There will be a pizza party on Tuesday, May 3 for everyone who posted at least one picture, and a grand prize for the most read Newbery honor books.

4-H Day at the Capitol was Feb. 9, and Cunningham took five 4-H students. They took a tour of the capitol, learned about the legislature process, and heard a speech from Gov. Kemp.

“We joined 500 plus other 4-H’ers from across the state. Dade County had not attended this event for the last six years. I was honored to be able to bring them down there for this experience, because I did it when I was a kid. I really want to bring this tradition back to where we do this every year again,” Cunningham said.

“I want to take a moment and brag on Laura. She came in two weeks before I left on maternity leave. Laura took everything she could and ran with it. Like she said, we are doing programs again that haven’t been done in years. If your kids and grandkids aren’t involved, now is the time to get them involved,” Dyer said.

“April begins sale season. They will look for their new livestock projects for next year. They will purchase them, and they have to do all of the breaking of those animals to get them show ready. We will start the summer season in June,” Dyer said.

George Williams, Chair of Alliance for Dade, reported that the Alliance currently has 103 investors, and the Alliance is working on renewals for second year investors. The recent Lunch and Learn event had 60 attendees. Over 30 Dade County residents, and over 15 out-of-town visitors came to the Welcome Center during the month of February.

The next Dade County Board of Commissioners meeting will be April 7.