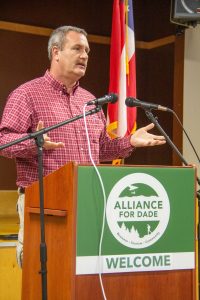 REBECCA HAZEN/Dade County Sentinel
Trenton Mayor Alex Case spoke about taxes and revenues in the city of Trenton, and also the ongoing work on the new distilled spirits package sales ordinance during the Alliance for Dade Lunch and Learn event.

The Alliance for Dade sponsored a Lunch and Learn networking event on Thursday, Feb. 24. The theme of the event was “Community Update.” Citizens heard from county and city officials Ted Rumley, Peter Cervelli, Alex Case, and Josh Ingle.

County Executive Ted Rumley gave an update on things happening in the county.

The Board of Elections, currently in the Administrative Building, will relocate.

“We will build a structure on a piece of property by the Bank of Dade. This has been talked about for years. We violate the law during elections, because we’re not supposed to be in the building except for to vote. That’s our offices. We can’t help it,” Rumley said.

The city and county are also moving forward on getting an animal shelter.

“We get numerous calls weekly pertaining to animals. It is something that we’ve got to do,” Rumley said.

“GEFA (Georgia Environmental Finance Authority) is working close with us to transition that property from the Water Authority. Water is critical. You may not see it today, but it will be one of the biggest things to happen in Dade County,” Rumley said.

A lot of paving work happened this year, including Burkhalter, Hales Gap, and Murphy Hollow Roads. Rumley noted that more paving would happen this summer.

The annual Tire Amnesty Day event will also tentatively be on the first Saturday in May.

“This is a big deal for a lot of people. It is expensive to get rid of tires. On that day it will cost you nothing,” Rumley said.

Peter Cervelli, former Chair of the Industrial Development Authority, spoke about the industrial and economic development of the county.

Cervelli noted that the community’s industries have grown, including the addition of Vanguard National Trailer Corp., and two solar facilities. Also, tourism has become the county’s fastest growing industry.

In addition, since 2014, employment in the industrial park has more than doubled, from about 500 people to 1,100. Starting wages during that period far outpaced inflation, from $9 to over $16 an hour.

“Dade County is going to see more changes, and I won’t be able to see them all, but it’s in good hands. I think there is going to be a lot of success in the future,” Cervelli said.

Cervelli continued, “We’ve got great opportunities here, great assets to use and grow. We need to continue to focus on our existing businesses. One of the priorities of the IDA is to grow a sales tax base for the community. We want to support our existing employees and employers, and everyone plays a role.”

Mayor Alex Case spoke about the on-goings in the city of Trenton.

“I’ve been involved in the city since my years as a junior fireman. Moving forward, there were certain things that made me want to get involved more, as a public servant. I’ve leaned on a lot of folks, day to day,” Case said.

Case continued, “Trenton has really changed a lot. We have all worked hard and the commission works hard together.”

Case noted that work continues on the new distilled spirit package sales ordinance that the city voters voted in during the Nov. election.

“This is something that we want to spend our time with and not do it in a hurry,” Case said. “Our planning commission and the commission has their eyes on this.”

Case cited bringing Tractor Supply in last year, which is now a big source of revenue for the city. Case also noted that the hotel and motel tax, collected by the city, is another monetary source that the city has benefited from.

“It is our taxes and our revenues that keep us going,” Case said.

“A lot of people going through to Birmingham or Nashville will stop at our cornerstone of Georgia. Our state park brings in 400,000 visitors a year. Another great partner for our community is the Southeast Lineman Training Center. Those boys come through here every 15 weeks. A lot of ministries and businesses are spending their time and effort helping us, Case said.

“Our goal was to return to in-person learning as quickly and as safely as possible. We have always let the data drive the decisions that our teams make. We have seen a steady decline. Now we feel like we have reached the point where kids, if there is an exposure at school, they don’t have to quarantine. We are just asking parents to monitor their symptoms. We want the kids in school, and we are working hard to close those learning gaps,” Ingle said.

Currently there are 250 students in Davis Elementary, 740 students at Dade Elementary, 429 at Dade Middle School, and 618 at Dade County High School.

Ingle noted that the Board of Education recently worked on a strategic plan virtually during the pandemic, and there were five major areas that the board focused on. These include student outcomes, promoting a safe and inspiring environment, stakeholder engagement, recruit and retain high quality teachers, and be wise stewards of financial resources.

“We are going to continue to follow our strategic plan and we will adjust as we need. We have four great schools; we’ve got great principals. I am blessed to be a part of the school system,” Ingle said.

The Alliance for Dade plans to hold another Lunch and Learn event in the future, with speakers Senator Jeff Mullis and State Representative Mike Cameron. For more information about the Alliance, visit alliancefordade.com.