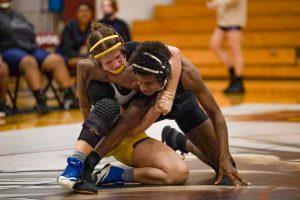 Contributed photo
Junior Heidi Raines is the only girl on the Dade County High School co-ed wrestling team. She hopes to start a girls wrestling team during her senior year. She has won two state champion titles, including one this month.

Heidi Raines, 16, the daughter of Randy and Rachael Raines, is the only girl on the Dade County High School co-ed varsity wrestling team. Two weeks ago, she won the 152 pound class Girls State Champion title at the GHSA State Championships in Macon.

Raines has been wrestling ever since she was 7 years old, except for a break during her sophomore year.

“My little brother started going to wrestling practice. I liked it. My dad used to tell me, ‘I know a six-year-old that can whoop you.’ It was my cousin, Landon. That is really what got me into it,” Raines said.

Raines noted that there have been a few other girls on the wrestling teams when she was younger, but no one has been involved as long as she has.

“I don’t know if there’s been a girl on the high school team in the past, at least not recently,” Coach Jeff Poston said. “She won the first ever girls’ match at a state tournament during her freshman year.”
When asked what it was like to be the only girl on the wrestling team, Raines said, “I’ve grown up with most of them. They are like a bunch of older brothers. During my freshman year, it didn’t go so well, but this year has been really fun because they have matured a lot.”

“She likes a challenge. She could have wrestled at 142 [weight class], but the tougher kid was in 152. In fact, two or three of them were in 152, so she went 152 because it was a harder route,” Poston said.
The best part about being in wrestling for Raines is getting the chance to improve throughout the season and beat someone that had beaten her earlier.

“The worst part is probably maintaining weight because I like to eat,” Raines said with a laugh.
Poston noted that he is extremely proud of the team. In addition to Raines, three other boys captured a state championship title. This is the first time DCHS has had four state champions in one year. There were three state champions in 2020, and Raines was one of them.

“We finished second as a team. We don’t get her points, and we don’t like that, but it’s a heck of an accomplishment. The team this year, they pulled for each other. They had good chemistry. It was fun to watch them grow throughout the year and get better and better,” Poston said.

Poston continued, “The girl she beat in the finals the other day was ranked No. 4 in the country. She got that ranking by going to these national tournaments. If Heidi decides to go on, they do have female wrestling at the national level.”

Raines’ goals for next year’s wrestling season are to keep having fun, and to start a girl’s wrestling team at DCHS. She especially hopes that she can get her sister to join.

“We are fighting hard to try to find about 10 girls. I am hoping they will see her success and then come and do that,” Poston said. “We have a couple of girls on the middle school team, and I think one of them might be on the high school team. Hopefully the example that she set will build throughout the years.”