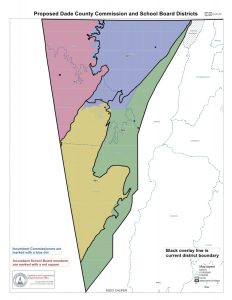 Dade County’s four districts were found to be unproportionate after the latest census results. The state has redrawn the district map, and both Board of Education and County Commissioners will have to vote to approve the map.

There are four county commissioners and four board of education members that each represents a district, plus one at-large representative.

“We look at this every 10 years after the census. Based on the current population in Dade County right now – there are roughly 16,000 people – mathematically, you would want 4,000 people in each of the four districts,” Dade County Schools Superintendent Josh Ingle explained.

“About three weeks ago I received a call from Josh. The state had contacted him about this,” Dade County Executive Ted Rumley said. “This was the farthest thing from our minds. This isn’t just in Dade County, this is in the whole state of Georgia.”

The current district map was adopted in 2004. With the new census results, District 1 has about 3,000 people residing in it, and the other Districts have over 4,000 people each.

“We have reached out to the Reapportionment Office in Atlanta, and they have redrawn the map to make it more proportionate. My understanding is it would not impact any current school board member or any current county commissioner,” Ingle said.

“You will have some in the Piney area and some on the upper part of Sand Mountain that will actually be in the North Dade District now, which is Commissioner Lamar Lowery’s district. These people will now be able to eligible to run for the North Dade District for commissioner or school board. That is the only change that we have, as far as inconvenience, if you can call it an inconvenience,” Rumley said.

Everyone will still vote at their same precinct location during elections.

“You’ll be hearing a lot about this in the next few weeks. It is something that the school board will discuss at their next meeting, and the commissioners will discuss it at our meeting in March,” Rumley said.

The Board of Education and County Commissioners will have to vote to approve or not approve the new map.

“Do we have to do it? If we do not do it, then we will be challenged by the state and voter groups that are looking at the fairness of voting in the State of Georgia. We could probably go through a lawsuit,” Rumley said.