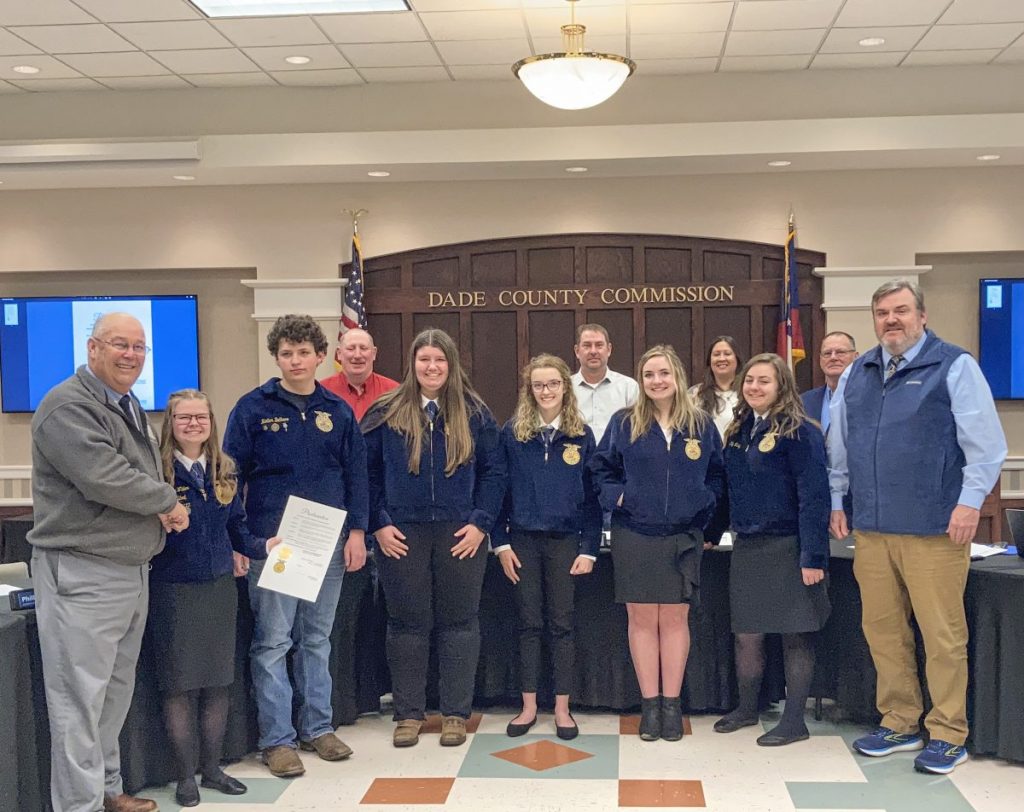 REBECCA HAZEN/Dade County Sentinel
The Dade County Board of Commissioners issued a proclamation designating the week of Feb. 19-26 as Future Farmers of America Week. Dade County Executive Ted Rumley presented the proclamation to members of the FFA.

Citizen Rachel Raines expressed concern about possible election and voter machine fraud at the Dade County Board of Commissioners meeting on Thursday, Feb. 3.

“I always thought the fraud was more in the bigger cities, and that we didn’t have a problem here, but now I am not so sure,” Raines said.

Raines noted that when she voted in the runoff election for the Georgia Senate seats, she printed off her ballot and there were no names on it.

Raines noted that she later found out that other people did not have names on their ballots as well. She asked if the county had any plans for an audit or to get rid of the machines.

Chris Wade, who has worked for Dade County elections in the past, was at the meeting. He answered some of Raines’ questions and concerns.

“If you don’t see the names on the ballot, you do not submit that ballot. Make sure you hand it to a representative. They can cancel that ballot out, and redo your ballot,” Wade said. “Until you slide that piece of paper into the ballot machine, your ballot does not count.”

Wade continued, “You can go into an election and decide that you don’t want to vote for anyone.” When that is a blank ballot, that is saying you are just voting present.”

Raines asked if it was possible to be able to use a paper ballot. Wade responded that the only way a paper ballot is currently used is for an absentee ballot or a mail-in ballot.

County Executive Ted Rumley thanked Raines for bringing her concern to the commissioners, because he was not aware of the issue. Rumley gave Raines his contact information and said that they could meet with the Board of Elections.

Also during the meeting, Alicia Juhl from Henderson, Hutcherson and McCullough reported the status of the county’s recently completed audit.

“We are glad to report that we can provide a clean audit report with no findings,” Juhl said.

Juhl reported that there was a 59 percent increase in the general fund compared to the prior year.

Juhl noted that, in addition to the general fund balance, there were positive, healthy balances in each of the funds.

“That is what you want to maintain and grow,” Juhl said.

There was a 17 percent increase in revenues, and Juhl noted that was good, considering the pandemic was still occurring.

Monica Moseley, Republic Services Inc., informed the commissioners that the annual transportation and disposal rate would have a $1.28 increase per ton, to $33.24. Republic Services provides recycling and solid waste services. The fee increase will be effective July 1, 2022.

The commissioners approved many proclamations, including Feb. 3 as Optimist Day, February as American Heart Month, Feb. 18 as Arbor Day, Feb. 3-7 as Severe Weather Preparedness Week, and Feb. 19-26 as Future Farmers of America Week.

The commissioners approved the appointment of Leisa Cagle to the Public Library Board.

The commissioners also approved the purchase of battery-operated extrication equipment for both New Salem and South Dade Fire Departments for $35,713 each. The purchase will be paid for with SPLOST funds.

The Commissioners also noted that they have submitted an event application to the Georgia Environmental Protection Division – STAR Program to hold the Tire Amnesty event on May 7.

Commissioner Lamar Lowery reported that EMS had 227 calls for the month of January, the fire departments had 278 calls, and the police had 2,021 calls.

Lowery also noted that progress is being made on the historical courthouse, and that hopefully by the next month’s meeting, there will be contracts to look over.

Commissioner Philip Hartline reported that middle school baseball practice has started at the Dade County Sports Complex, and that recreation softball sign-ups are being held this month.

Commissioner Robert Goff reported that the SPLOST balance is $270,549.39.

“This does a lot in our county and the amount has stayed up,” Goff said.

Commissioner Melissa C. Bradford reported that there were 322 work orders for the Road Department for the month of January. There were 789 tons at the Recycling and Transfer Station, which is up from around 500 tons.

Rumley reported that, weather permitting, work will begin soon on the concrete pad for the storm shelter on Davis School Road.

There will be a male involvement/fatherhood meeting on Saturday, Feb. 19. Andy Porter, from Family Resource Agency of North Georgia, will hold a presentation. Space is limited, so call the library to RSVP.

A Prime Time Family Literacy program is ongoing through the month of February, which is designed to help children succeed academically and help bond families around reading. The program includes weekly storytelling, reading, and discussion sessions.

“We have recruited underserved families. This is a grant funded program,” Haworth said.
Haworth also encouraged everyone to check out Libby and E-Read Kids, digital resources through the library, which are free with a library card.

The February 4-H movie night will be Friday, Feb. 18. The movie “Encanto” will be played.

The 4-H Livestock Show Team recently competed in two shows, the Banks County FFA Show and one in Jackson County.

The Magic in the Mountains Winter Classic show, held in Dade County, was on Feb. 5. This show was for breeding does and ewes.

The D.A.D.E. Grass Class will be Feb. 21 at 6:30 p.m. The speaker is Sarah Dyer, who will talk about identification of common weeds in pastures.

Alliance for Dade Chair George Williams reported that there are 96 investors. Williams also noted that the Alliance would host a County Update Lunch and Learn on Feb. 24, where local officials will present information.

The commissioners went into executive session to discuss real estate matters, but no action was taken afterward.

The next County Commission meeting will be March 3.