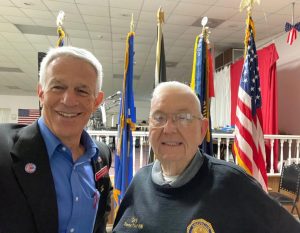 Charles Lutin is attempting to meet as many people in the 14th Congressional District as possible, part of his campaign to win the district seat. Lutin (left) visited the American Legion Post 106 and met with Legion member Gary Bell.

Republican Charles Lutin made his third visit to Trenton on Tuesday, Feb. 1, as part of his campaign to run for the 14th Congressional District seat.

Lutin announced his intent to run for the seat last fall, and since then he has made an effort to meet as many citizens of the 14th District as possible. Also, Lutin recently held a campaign kickoff event on Saturday, Feb. 5, in Rome.

“The campaign is going better than expected. The Associated Press has gotten interested. If this starts to get into the national press, it’s going to be a big story. That’s hopeful,” Lutin said.

However, Lutin noted that his campaign is still under funded and is stretched thin. He’s still looking for a campaign manager and a social media manager.

“There are some gaps, but it’s coming together. I do have a message that resonates with people. I think I have a personality that people respond to. I believe firmly in the old saying that right will make might,” Lutin said.

During his visit to Trenton, Lutin first had breakfast at McDonalds, where he said he made many new friends. Then he “got his 15 minutes of fame” at the KWN TV and radio station. Afterward, he visited the American Legion, and spoke at the Optimist Club meeting. He also attended the Alliance for Dade board meeting.

“It is a wide geographic area. I can’t appear personally in front of every book club and every school board and commission meeting, but I will do my best. I have made a pledge that every public official who wants to meet me before the election will have a chance to do so,” Lutin said.

Lutin noted that people’s reception toward his campaign has been varied, with some people greeting him with “suspicion.” However, Lutin said that the majority of the people in the district have been welcoming, and they are happy to hear a new political voice. According to Lutin, the people of Dade County have been exceptionally friendly.

“I think I am going to be able to convert more and more voters to my cause and recruit voters who don’t normally vote in Republic Primaries. I may be a fool, but I predict victory on May 24,” Lutin said.

Lutin continued, “People here are just as smart and just as sophisticated as anywhere else, whether they do farm work or some type of technical work. I think the people here want respect. They feel acutely that the district and the people who live here are disrespected by the general U.S. population, and I think they want better representation.”

Six issues that are important to Lutin are term limits for Congress, the Second Amendment, the reorganization of Veterans Affairs (VA), education, law enforcement, and securing the borders. His stances on these issues, plus more information about the campaign, can be read about on lutinforcongress.org.

Lutin is a board-certified emergency physician and family practitioner originally from Nashville, Tenn. He spent five years serving as a flight surgeon in the U.S. Air Force in Arizona, Iraq, Afghanistan, and Warner Robins. He has been retired from medical practice since 2019. He has two adult children, Anne and David. Lutin enjoys hiking, bicycling, aviation and country music.

The primary for the 14th Congressional District seat will be May 24. The elected official will start their two-year term in January 2023.