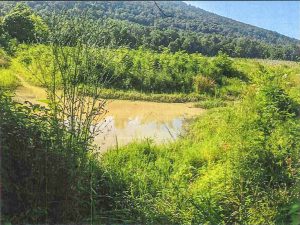 Photo courtesy of CorBlu Ecology Group
The Dade County Water and Sewer Authority is giving county officials until March 7 to make a decision about the Sells Lane property. CorBlu Ecology Group conducted a field study of the property last summer. Late last year, the authority informed the county that they would be unable to go forward with the plans of turning the property into a water reservoir.

The Dade County Water and Sewer Authority voted to set a March 7 deadline for the county to decide about the Sells Lane property during the Tuesday, Jan. 25 meeting.

“We discovered that there is no way that we can see a way forward with the reservoir,” Chair Eddie Cantrell said. “We have already told them we want to sell. We are saying to the county, let us know what you are going to do by this time frame.”

The Water and Sewer Authority and the Dade County Commissioners held a joint public meeting on Nov. 8 to discuss the future of the Sells Lane property, which was bought with the intention of building a water reservoir.

During that meeting, the authority formally requested that the county take over control of the property by assuming the remaining debt.

The Water Authority put in 80 percent of the money and the county put in 20 percent for the purchase, which was $500,000 total. In practical matters, Cantrell noted that it was a 50-50 partnership. The authority has still been making payments on the property.

The commissioners at the time said that they would have a discussion about the property, but no decision has been made yet.

Chairperson Eddie Cantrell said that they spoke to their attorney Michael McRae, a lawyer from Cedartown, about setting a deadline. It was noted that McRae had recommended a shorter amount of time.

“We will get the request to them as soon as Mr. McRae finishes the letter. He will email it to all of the commissioners,” Cantrell said.

Also during the meeting, Julie Klotz, from JHM Certified Public Accountants, attended the meeting to report on the status of the authority’s 2021 audit report.

“The financial statements present fairly, the financial position of the authority,” Klotz said.

The authority’s accumulated earnings since incorporation are up $239,000 from the prior year.

“The authority had no compliance issues this year,” Klotz said.

General Manager Sherri Walker reported that the authority had to participate in a statewide PFAS (Per- and Polyfluoroalkyl Substances) monitoring effort, requested by the Georgia Environmental Protection Division.

According to epa.gov, “PFAS are widely used, long lasting chemicals, components of which break down very slowly over time.”

“We got all the samples back and nothing was detected in our water. I didn’t expect to have any because our water comes from mostly springs. Most of the time this stuff is going to come from, like the Tennessee River where it goes through industrial areas,” Walker said.

In the Hinkle area, all water main upgrades have been installed. Several service reconnects are still pending due to a copper shortage.

The meter replacement program is in progress, with 1,120 residential meters replaced out of the 1,153 received.

Construction of the Sand Mountain Pump Station began on Jan. 24.

Construction on the Emergency Community Water Assistance Grant is complete, but the east side of I-59 still needs surface restoration work.

The authority re-elected Eddie Cantrell as the chairperson and Travis Daniel as the secretary and vice chair.

The next Water and Sewer Authority meeting will be Feb. 22.