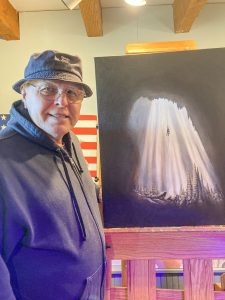 REBECCA HAZEN/Dade County Sentinel
Local artist Ken Pennington has written a book, “The Rockeaters,” which will be published later this winter. “The Rockeaters” is a fictional adventure story, which includes real events that happened to members of Pennington’s family. Pennington poses with the painting that will be on the front cover of the book.

Ken Pennington, a Dade County artist known for his paintings, is in the process of publishing his first book, “The Rockeaters.”

The idea for “The Rockeaters” started when Pennington was a child, exploring caves.

“I started this story when I was 8 or 9 years old. Every weekend I wanted to go to the side of the mountain and go in a cave. My best buddies wanted to go too. That was our main hobby, cave exploring,” Pennington said.

Pennington continued, “Other kids at school would ask how caves are formed. I would make up these stories about Rockeaters. They would eat the minerals that came from the rocks. I was a kid myself, but when I told these stories to these little kids, you could see it was almost as if they believed it. That just encouraged me to tell a better story. So, I have been thinking about this book for about 50 years.”

“The Rockeaters” is fictional, but many of the stories in the book are based on fact, things that happened to both Pennington and his family members. The main character in the book is from the Isle of Bute, which is in the highlands of Scotland. That is where some of Pennington’s family is originally from.

“You wouldn’t believe the things that’s happened to my family, it’s unreal. I can trace my grandmother’s family back to 1624. She had uncles that were ship captains and masters. They would write to their newspapers about what had happened to them. I have managed to get copies of those newspaper articles going back to the 1700s,” Pennington said.

The book jacket reads, “The Rockeaters” is an epic account of Jeremiah McCurdy, 1620-1752, describing his search for and the discovery of the legendary Rockeaters. Jeremiah was a Scottish Highlander who immigrated to colonial America in 1633 and was immediately caught up in all the wonderful people and places he encountered as he explored the new world. His friendships with Native Americans, ex-enslaved Africans, and his Highlander neighbors made history. There are heroes, lifelong friendships, lasting loves, and colorful characters involved throughout his journey.”

“There is adventure, humor, love, betrayal, and forgiveness. There are wars with battles on land and at sea. Explorations of high mountains and deep caves, and finally there are the Rockeaters themselves, a benevolent race of ancient people who had managed to survive from antiquity. Jeremiah is unwittingly chosen for a great quest that involves wonderful gifts, long life, and grave dangers. It is an adventure almost too fantastic to believe and if not for his journals would have been lost and forgotten long ago.”

Pennington said that transitioning to writing, a different creative outlet from painting, was natural.

“My mind just sets things up. I dream about things, and I would get up and write them. My mind is always working ahead of where it should be.”

Start to finish, Pennington said that the book process took a couple of years. In between, he was taking trips and exploring. His experiences then became part of the story.

The book, published by Christian Faith Publishing, is in the printing stage and should be available in about six to eight weeks. When the book is published, it will be available at all major book outlets, such as Books-A-Million, Barnes and Noble and Amazon. Pennington hopes to sell some books at the local McBride’s Book Store as well.

“I always enjoy telling stories. I’m a dreamer, and I always have been. Everyone kept telling me that I should write a book. I want this to be an adventure that everyone enjoys reading,” Pennington said.