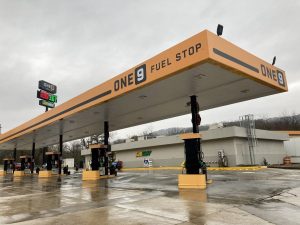 REBECCA HAZEN/Dade County Sentinel
A shooting occurred at the One 9 Fuel Stop at Wildwood, on Monday night, Jan. 3. Ethan Wayne Rogers of Fort Payne, Ala., was driving a stolen vehicle, and was pursued by DeKalb County officers. Rogers attempted to run over one of the officers. A second officer shot Rogers. Rogers was transferred to Erlanger Hospital. Rogers has been charged with aggravated assault on a peace officer and theft by bringing stolen property into the state.

Ethan Wayne Rogers, 32, of Fort Payne, Ala., was shot by a DeKalb County, Ala., officer after a pursuit in Dade County on Monday night, Jan. 3.

According to Dade County Sheriff Ray Cross, DeKalb County authorities then responded to the scene and were able to locate the suspect around 7 p.m.

“As investigators approached the stolen car on foot, they instructed Rogers to get out of the car. Rogers failed to exit and it has been reported that Rogers drove the car in the direction of one of the investigators. A second investigator shot into the car, striking Rogers,” a Georgia Bureau of Investigation press release said.

Rogers was transported to Erlanger Hospital in Chattanooga. Neither of the other two passengers was injured.

“Last I heard he was in surgery, and he would be in the ICU for a while,” Cross said about Ethan Rogers. As of Friday, Jan. 7, Rogers was still in the hospital.

According to Dade County Public Information Officer Chad Payne, once Rogers is released, he will be booked at the Hamilton County Jail.

Rogers had active warrants out for his arrest, and according to Cross, he had stolen other vehicles in the past.

The Dade County Sheriff’s Office has charged Rogers with aggravated assault on a peace officer and theft by bringing stolen property into the state.

“The female had outstanding warrants on her and she was arrested too. The male was released. Right now, it is still under investigation under the GBI,” Cross said.

The woman was identified as Harley Danielle Turner, 27, from Pisgah, Ala. She was arrested on an Alabama warrant. She is no longer in custody.

According to dekalbcountysheriff.org, Rogers and Turner were both arrested on Nov. 5, 2021, for third-degree burglary. Rogers had been on the run from police for two weeks, before he was found at a home in Pisgah with Turner.

The names of the involved DeKalb County Officers have not been released.

The GBI will conduct an independent investigation. Once complete, it will be turned over to the Dade County District Attorney’s Office for review.