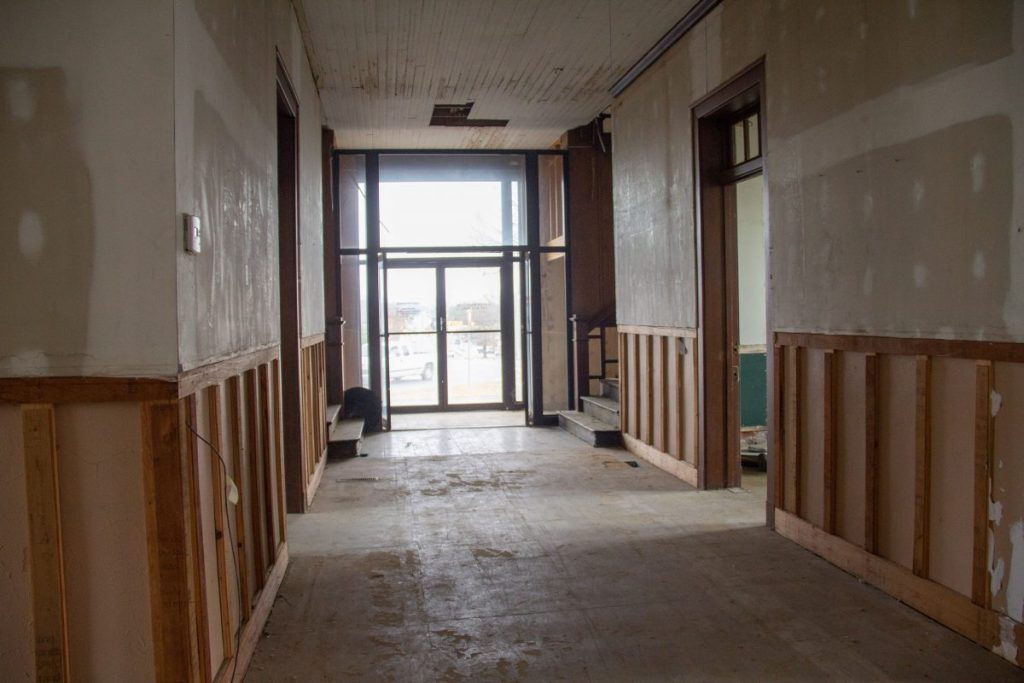 REBECCA HAZEN/Dade County Sentinel
The Dade County historic courthouse once held many different offices, such as the sheriff and the school superintendent. People could also vote at the courthouse and get married. The Historic Preservation Commission would like to see offices in the building once more, as well as space for meetings and parties.

Work on the Dade County Historical Courthouse is underway after six years’ worth of preparation including forming a commission, securing funds, and most recently hiring a construction management company.

“We started working in March of 2015,” Street said. “We thought this was going to be a little hop, skip and a jump. We quickly found out that it was not. By year four, we had written two grants that were accepted, until last year, when everything got put on hold.”

“It’s hard to believe, but it really has been a lot of work and effort into the whole process. Some of these things were like mountains to climb,” Clark said.

In the courthouse’s heyday, it housed the offices of the sheriff, the school superintendent, the tax commissioner, the county commissioners, and more. Citizens came to the courthouse to vote in elections, and each room had a fireplace in it.

“When you came to the courthouse, you did everything,” Rex Blevins said.

“My first time in here was for 4-H, which was upstairs,” Street said. “The first time I ever came in here, the water fountains had a ‘whites only’ sign on it.”

The building has sat empty since fall of 2010, when the new courthouse facilities opened.

“We ran out of room to store things,” Street said about the historical courthouse. It was noted that there were only two rooms to store items, and both were overflowing.

The commission hopes to upgrade and modernize the building, while preserving as much of the history as possible.

“The jury deliberation room did not have a fire escape,” Street said. “There was a chained rope that hung on the window that they could throw outside. None of the judges that have dealt with this building have found it very funny.”

The commission members would love to see the courtroom become a community room, where networking events or parties can be hosted in the future.

They also hope to have one of the original offices become a prep work kitchen for events, and another room as a dressing room, if plays are held once again in the old courtroom, like they used to be back in the day.

One of these plays was “The Night of January 16th,” which is a play set in a courtroom during a murder trial, and members of the audience are chosen to play the jury.

“We got two different verdicts,” Blevins said, who was in the play in high school.

Blevins continued, “The history of all that happened in here could fill volumes of books.”

Street asks that if any community members have pictures of the inside of the courthouse, before the 1980s renovation, to please send them to the commission members.

“We all thought, somebody ought to do something,” Clark said. “I thought, well I could tear down the vines that are going up. So, I would go after work and start trimming.”

Clark said that employees at the Sheriff’s Office took notice of the work and asked who was doing it. When Clark said she was doing it on her own, they offered help through the trustees.

“When they started getting things cleaned up, it’s just gone on and on from there. People are excited for this; I am excited for it.” Clark said.

The next big project is to find sponsors for each of the room, and items in the rooms, such as furnishings.

The Historic Preservation Commission’s goal is to have the project completed within two years.

Recently, Blevins Construction Management, Inc, out of Wildwood, has been hired to oversee the project.

“We’re excited and honored to be a part of the renovation. It is a rare opportunity to work on a building with historical value such as this one. Our hope is that the project is a success for everyone, and the end product is what the Historic Preservation Commission is aiming to achieve,” Jamey Blevins, co-owner of Blevins Construction Management, Inc., said.