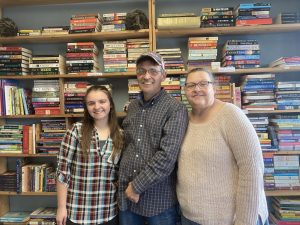 REBECCA HAZEN/Dade County Sentinel
Makay McBride, Coy Williams, and Ginger McBride work at and own the new McBride’s Bookstore in Trenton. Ginger and her brother Coy hope to turn the bookstore into a place where the community likes to gather, and a spot to find not just used books, but also video games, board games, music and more.

At the new McBride’s Bookstore in Trenton, the McBride’s and their family members want customers to know that it’s a family-owned bookstore, and that they want you to feel like family when you walk in the door.

Located at the former Books Never-Ending location at 5375 Highway 136, the McBride’s stumbled across the opportunity to purchase and own their own bookstore.

“My mom was next door getting her eyes checked. I had my three kids with me, and we went next door to look at the books while we were waiting for her. We walk in and Mr. Curry said that he was closing it down. I said, ‘Oh! You can’t close the bookstore,’” new owner Ginger McBride said.

McBride continued, “I told my kids that I would try to get it, and if the Lord was in it, it would all work out.”

McBride said that she has worked as a nurse for 18 years at Memorial Hospital, but she has always wanted to own a bookstore. She noted that her brother, Coy Williams, and her children all love books.

Williams, McBride’s daughter Makay, and other family members and friends are helping with the store, which opened two weeks ago.

“I got Coy involved because he’s my ace in the hole. He knows more about books than I do,” McBride said. “I really want to thank my family for doing a lot of the grunt work. I’ve been at the hospital three days a week, and they’ve been here doing a lot of the muscle related stuff.”

The owner of Books Never-Ending included all the books in the store, plus about 5,000 more in a warehouse, as part of the purchase.

“The idea is to get the store situated first. When we first came in there were boxes up and down the aisles. A lot isn’t even sorted yet. We are going book shopping every week to bring new books in,” Williams said.

Williams continued, “A lot of the old stuff was the same old product. I understand that he was one person, so it was hard for him. But we have three people now, and more that help and volunteer. It helps us go through each individual section and pull out what we can’t sell. It also shows us what we are lacking.”

Since opening, the bookstore has expanded its children’s section with more favorites like Curious George, Judy Blume, and Little House series. They have also expanded the classics section.

McBride’s goals for the bookstore include taking out the old and bringing in the new, as well as lowering the prices.

“We have been working on moving things around. We want to make our kid’s section bigger. We would love to have them come in on the weekend and be read to,” McBride said.

“Our goal is to become like a mini McKays. If we have that available in Trenton, where we have video games, music, comic books, they will come here instead of going there. I think people will appreciate having that here,” Williams said.

The bookstore would also like to make sure that they have the books on hand that are on the school’s summer reading lists.

Williams noted that if a customer has a specific want, they will go out and search for it before trying to order it. McBride’s Bookstore also welcomes customers to come and trade items.

“I want people to know that we will try to find whatever you want,” Williams said.

“Everyone reads so many different things,” Williams said. “Someone will ask about something that you’ve never heard of, and that’s neat.”

McBride also noted that they have enjoyed meeting the community members that come in to the store, noting that a lot of them didn’t even know that the old bookstore had closed.

“We’ve been having a blast,” McBride said. “We have met some interesting people, like one woman who wrote a children’s book. She’s going to bring us copies. Then we met a man who is writing a book. He gave us a donation and he just wanted to meet us and talk.”