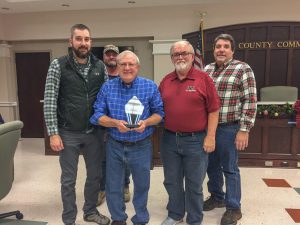 REBECCA HAZEN/Dade County Sentinel
The Water and Sewer Authority honored Dr. William Pullen, Jr., “Doc,” for his 13 years of service on the board. The Dec. 21 meeting was Pullen’s last meeting. Alan Townsend will take Pullen’s place on the board in January. From left are Travis Daniel, Darell Pardue, William Pullen, Eddie Cantrell, and Daniel Glecier, II.

The Dade County Water and Sewer Authority honored Dr. William Pullen, Jr., “Doc” for his 13 years of service on the board. The Dec. 21 meeting was Pullen’s last meeting.

“One of the amazing things about being on this board is getting to know new people,” Chair Eddie Cantrell said. “I wouldn’t know any of you without serving on this board. It hasn’t always been fun. Many times, it has been hard. We have tried our best to do right by our employees and customers.”

According to Cantrell, a statement was made that the Water and Sewer Authority board was political, regarding the joint meeting that the authority and the Dade County Commissioners had in November, about the reservoir project.

“If this board was political, we would have saved that meeting until after Doc’s reappointment or two or three months before an election. We promised the county that we would share the information as soon as we got it, and that’s what we did,” Cantrell said.

Cantrell continued, “I hate the way this thing turned out, but we did the right thing. I don’t think this board is political. I think we are doing the best we can. There are a lot of questions as to why this is happening, but all I can say is whatever Doc wants to say. I am not going to speak for him. [Commissioner Lowery] had every right to do what he did. I have spoken to Alan Townsend about it, and we will welcome him on the board.”

“Time flies when you’re having fun,” Pullen said. “I have worked with some amazing people. It has been an amazing 13 years.”

Pullen noted that his father had helped to form the water system in 1958.

Pullen continued, “I appreciate the opportunity to serve. I support the board; I support Mr. Townsend, the county and everyone else involved in this.”

The water main upgrades in the Hinkle area have all been installed. There are several service reconnects still pending due to a copper shortage. The project is expected to close out in January.

All water mains have been installed on Creek Road and Sarah Chapel Road.

The meter replacement program project is in progress. Phase 1 is complete on Lookout Mountain. Phase 2 is in progress for Sand Mountain, with 3,048 meters to be shipped and installed in late 2022.

The material for the Sand Mountain pump station upgrades has been delivered except for piping and some fittings due to material shortages.

The Emergency Community Water Assistance Grant project is complete except for a water main Bac-T test, and site clean-up.

The board voted to extend the timeline of their Georgia Environmental Finance Authority loan to 2023.

“The loan was supposed to close out in January, but since our meters won’t be in until October, we requested that they extended that. UDSA and GEFA have been very helpful with that,” Walker explained. “This has to be done, otherwise these projects have to be closed out.”

The next Water and Sewer Authority meeting will be Jan. 25.