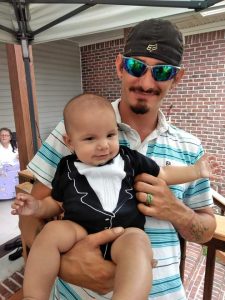 Contributed photo
Parents James and Debra Alfrey want justice for their son, Justin Alfrey, pictured here with his son Wyatt, who was shot and killed three years ago. All charges were recently dropped for murder suspect Sam Street, due to a lack of evidence. The Alfreys want the investigation to be reopened, to find the right person who killed their son.

Justin Alfrey, 32, of Valley Head, Ala., was shot and killed on the night of Dec. 14, 2018, in Rising Fawn. Three years later, after all charges were dropped for suspect Sam Street due to a lack of evidence, Alfrey’s parents are still looking for answers.

“He was a young father, he had an 8-month-old son, Wyatt. He was striving to do better after his son was born. That was all he ever wanted, a kid,” Alfrey’s stepmother, Debra Alfrey said.

The Alfreys are raising Justin’s son, who is now three years old.

Alfrey explained that on the night that Justin died, they had been planning to celebrate an early Christmas as a family the next day. Alfrey’s father, James, is a boat captain and was going to be away during Christmas. Justin and his fiancé, Wyatts mother, had dropped off Wyatt at his parents house.

Around 4:30 p.m. Central Time, Justin got $20 and a pack of cigarettes from his father James and got ready to leave the house.

“My first thought was, maybe Justin was in jail or something. He went on our porch. When he came back in, I knew something was wrong. He told me to sit down. That is when he told me that Justin was shot,” Alfrey said.

As investigators looked into the case, James and Debra found out that Justin took two people, a man and a woman, to Ryan Street’s house at 106 Highway 11 South in Rising Fawn to purchase marijuana.

“I don’t know if he knew what they were going to do at the house. I’m not saying he’s a saint, but he stayed in the car. Supposedly the two of them went up to the house,” Alfrey said.

“What happened or who shot Justin, we don’t know,” Alfrey said. “All we know was that he was left in the car from 8 p.m. Georgia time, and the cops weren’t called until around midnight.”

The woman reportedly called the police, and reportedly had to change her clothes before speaking to investigators.

“Why did she have to change clothes? Why did they not check for gunpowder residue? Why wasn’t more questioning done? I do not know to this day,” Alfrey said.

The man and the woman reportedly told investigators that they saw a vehicle pull up, and someone fired a shot inside the car, killing Alfrey.

“We tried to get the DA, [Buzz Franklin] to tell us how they knew that it was Sam Street. The only response that we got was that it was his property there. They said he showed up that night, and he supposedly fit the description. All I know is that my stepson did not know Sam Street and Ryan Street. These other ones did. It doesn’t make sense to me,” Alfrey said.

The Alfreys were also told that Sam Street supposedly shot Justin because it was a case of mistaken identity.

Sam Street was released from prison this past October.

“We got called in before they released him. We were told they were going to release him because they did not have enough evidence. When the new DA came in, he said he had several people look over the case. He said what I’ve been saying all along, they botched the case,” Alfrey said.

“Someone needs to do their job, and they need to start questioning. There is a murderer walking around free in Dade County. We want answers,” Alfrey said.

Alfrey continued, “If Sam Street is innocent, I don’t want to see him in jail. I want the right person persecuted. I think they should have questioned the others more,” Alfrey said. “I will not rest as long as I have a breath in my body, and until someone listens to me.”

The Dade County Sentinel reached out to both the Dade County Sheriff’s Office and the Lookout Mountain Judicial Circuit District Attorney’s Office for comment but did not hear back before press time.