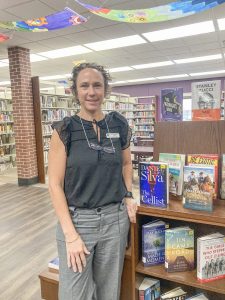 Mindy Haworth, from Flintstone in Walker County, is the new Dade County Public Library Manager.
Haworth has worked at the library for a few weeks, and she is enjoying all the people she is meeting, and all the things she is learning about the community.

Haworth is the mother of four grown children. She was a stay-at-home mom for 27 years, but she was a teacher prior to having children. She was a middle school math teacher in 1994. A couple of years ago she went back into education and taught English Language Arts for sixth grade at an all-boys charter school.

“I was an ELA teacher, so I was committed to getting my students to read. It was a startup school, so we didn’t have a library. We were tasked with creating our own classroom libraries. I am fascinated with books and getting the right books in the right hands. I am an avid lifelong library user,” Haworth said.

When she saw the job posting, she said that she kept it in the back of her mind for a long time, and her heart keep calling her back to it.

“I went out on a limb and let them know, I don’t have a lot of experience in a library other than as a patron, but my mother was a media specialist, so I grew up in libraries. I helped her open a high school library at the high school I went to. Libraries have always been a part of my life, and I was called to it,” Haworth said.

When Haworth got the job as library manager, she said it was “almost unbelievable.”

“I feel like a lot of my life experience translates to managing the library. I am a firm believer that anything I need to learn, I will learn,” Haworth said.

Haworth noted that she spent a week training at the LaFayette-Walker County Public Library, which is the headquarter branch of the Cherokee Regional Library System. Haworth also thanked library assistants April Tinker and Georgeann Jones for helping her learn and get up to speed.

A few weeks into her new job, she says she is astounded by the number of patrons that the Dade County Public Library has.

“Everyone has been so welcoming. I love talking to the patrons. Getting to know people’s stories is important to me. This branch is unique, and this community is unique,” Haworth said.

Currently, Haworth is working on the library’s summer reading club, and booking talent performers. She also attended the monthly book club meeting, where the club members set all the books to read for the upcoming year.

Haworth also said that part of the learning curve of the new job is getting to know the community as well.

“I have been to a city council meeting and a county commission meeting. I am just trying to learn as much about this community as I can. The people I have met have been so welcoming and so friendly. Everyone knows everybody and everyone is willing to help each other out,” Haworth said.

Haworth’s goals as library manager include maintaining the library’s great history of being a part of the community, increase its patronage and keeping the book collection updated.

Haworth also wants to see more teens coming into the library and would like to see more programming for teens and adults.

“We are still looking to fill our youth education coordinator position. We are taking our time and trying to find the right person. Hopefully when that person gets put in place, we will put more programming out there,” Haworth said.

Haworth loves the resources that the library has to offer, including the Learning Express Library program, which offers career preparation and test preparation for college admissions, and more.
“We need to keep the community abreast of all the things the library can help them with,” Haworth said.

Some of Haworth’s favorite books include “All the light We Cannot See” by Anthony Doerr, “The Four Winds” by Kristin Hannah, and “News of the World” by Paulette Jiles.

“I read a lot on Libby, the audio book app we have through the library. I get a lot of books read going to and from work. I just started the January Book Club book, ‘The Wonder Boy of Whistle Stop’ [By Fannie Flagg],” Haworth said.