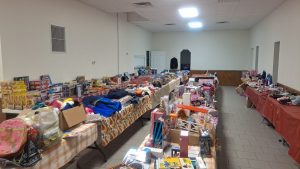 Gifts were collected at the Faith Community Church for the Trenton Santa Train. The gifts and items for Christmas dinner were distributed to families on Dec. 22. 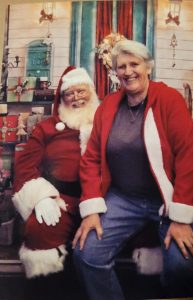 Debbie Manwarren, the organizer of Trenton Santa Train, poses with Santa Claus. Manwarren started the volunteer effort last year after seeing a need in her community.

Almost 200 children will have a great Christmas, and 86 families will have a Christmas dinner this year, thanks to Debbie Manwarren and what started out as a small idea last year.

Now in its second year, the Trenton Santa Train has grown in leaps and bounds, and the number of volunteers has increased, too.

Last Christmas, after seeing local families struggling during the holiday season during the COVID-19 pandemic, Manwarren posted on the local New Home Community Facebook page, to see if anyone else wanted to join her in helping a couple of families out.

“It started because of COVID. I work for Amazon, so my job wasn’t going anywhere, and I know that a lot of others have lost their jobs. And that still goes for this year too. People are still trying to get back to normal,” Manwarren said.

The Trenton Santa Train opened applications for families in September. The number of children that the volunteers are helping this year has increased from 163 to 196.

All the donations were collected at the Faith Community Church, and volunteers have held wrapping days to get all the gifts wrapped. In addition, businesses Mountain Top Auction and Sales and Mom N Pops helped to collect donations as well. A toy run was also organized, where community members shopped together at Walmart for gifts.

“It is all volunteer. People from the church and community reached out. They have done an awesome job,” Manwarren said.

The goal was for each child to have three gifts, in addition to a handmade hat.

The Christmas dinner will have all the fixings, including a turkey, stuffing, potatoes, green bean casserole, macaroni and cheese, rolls, and a cheesecake.

Distribution of the gifts is today at Faith Community Church at 2550 New Home Road, from 11 a.m. to 2 p.m. Santa will also be there to take photos with the children and families.

“My walk with Christ is close. So, when I see a need, as Christian and as a human being, I reach out. The need is here and apparently greater than what I knew because we grew. I don’t see this going anywhere anytime soon,” Manwarren said.

Manwarren continued, “We are giving a hand up and not a handout. We are sowing that seed for the next generation, so they know that there is help out there. I hope that in the future, these people will be able to pay it forward.”