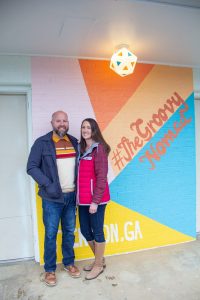 REBECCA HAZEN/Dade County Sentinel
Ryan and Melissa Faircloth are the owners of The Groovy Nomad, a boutique motel in Trenton set to open up in the spring. 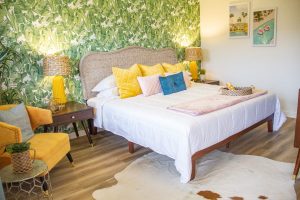 REBECCA HAZEN/Dade County Sentinel
The Faircloths have completed two rooms for The Groovy Nomad, including this one. Each room will have a completely different theme and will include a flat screen TV, a walk-in shower, a microwave, mini fridge and coffee maker.

The Groovy Nomad, a new, quirky, and colorful boutique motel in Trenton, will be welcoming its first guest’s next spring.

Ryan and Melissa Faircloth purchased the building, located on Highway 11 North, which had been empty and neglected for many years.

“I am a real estate broker. We started investing in 2016. We have flipped houses, and now we have some rental properties. We were led to do more in our community. We needed to focus on Dade,” Melissa said.

“This building has been sitting here empty. Every day I would drive by, and I would say, ‘I’m going to buy that someday.’ It took me three years to buy it,” Ryan said.

The in-progress project includes all new wiring and plumbing, new windows, and doors. The only thing that is original is the walls.

“We bought it and then we figured out what we were going to do with it,” Melissa said. “We just started bouncing ideas off of each other.”

“We knew we could do something pretty cool if we just put our minds to it,” Ryan said.

Each room will have a different theme, set off by a bold wallpaper print on the wall behind each bed.

For one of the rooms with a retro theme, they found a whole vintage set of furniture from 1961.

“The next room will be a 1970s theme, and the next will have a vinyl record theme,” Ryan said,

The rooms feature a tiled walk-in shower, a microwave, a mini fridge, flat screen TV, and a coffee maker. Each room will have a lava lamp as well. One of the rooms will be a suite with a kitchenette.

“It’s going to be an experience, instead of going to a hotel where every room is exactly the same. Maybe people will come back and say that they want to stay in the vinyl room next time, or the Gatsby room,” Ryan said.

The Faircloths also hope to have an outdoor lounge area on the lawn in front of The Groovy Nomad.

The outside of The Groovy Nomad features colorful murals painted by local artist Keeley Farmer. One of the murals features #TheGroovyNomad. The Faircloths encourage people to visit, take pictures of the murals, and use the hashtag on social media.

“There have been a lot of people coming already. It’s exciting,” Melissa said.