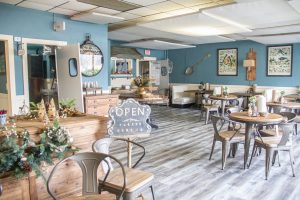 REBECCA HAZEN/Dade County Sentinel
The Birdy Bistro will open up on Jan. 10 in Trenton at 180 Crabtree Street. The bistro will serve both breakfast and lunch.

The Birdy Bistro, a new breakfast and lunch eatery, will open in Trenton on January 10.

The Birdy Bistro is located at 180 Crabtree Street, and will be open Monday through Friday from 6 a.m. to 2:30 p.m.

Melanie Thatcher, owner of Thatcher’s BBQ & Grill, is the owner of The Birdy Bistro.

“This has always been one of Melanie’s dreams,” Chastity Crabtree, The Birdy Bistro General Manager, said. “Thatcher’s is running smoothly, and the opportunity came available.”

Breakfast will feature breakfast sandwiches and pastries such as muffins and cinnamon rolls. Plus, there will be a daily quiche.

Lunch will feature paninis and cold sandwiches. The main meats featured will be ham, turkey, roast beef and chicken.

There will also be salads and pasta salads, and a few different chicken salad sandwiches.

Crabtree noted that her favorite chicken salad on the menu has jalapenos in it which gives it a little kick, and it is also keto friendly.

There will also be soups, including a daily soup named Birdy Harvest, which is a chicken noodle style soup with lots of vegetables including spinach.

There will be an assortment of coffees, hot chocolate and smoothies available as well.

There will also be desserts such as brownies and cheesecakes.

The Birdy Bistro will offer Chow Now, which is an option for people to order online and pick their order up outside.

“In the morning, a lot of people are hurrying to get to work, and they don’t have a lot of time. It will help them get to work quicker,” Crabtree said.

The theme carries throughout the space, with little bird nests on the tables as decorations, plus prints of different types of birds on the walls, and bird cages as well.

Customers looking at the menu will also see the bird theme as well.

Crabtree thinks that The Birdy Bistro is different compared to the other restaurants in Trenton and thinks it will be a good fit for the community.

“It will be upscale type,” Crabtree said about the overall menu. “There will be some special homemade jams on some of the items that taste really good. There are several different cheeses that you wouldn’t see in other places. It’s more of what you would see in Chattanooga.”

“I hope that we pack it out and that we do great. That is my goal. I hope that everyone enjoys it and loves it and that it has that home feeling atmosphere that I love about Dade County,” Crabtree said.

For more information, stay tuned for a Facebook page that will be created soon, as well as a website.