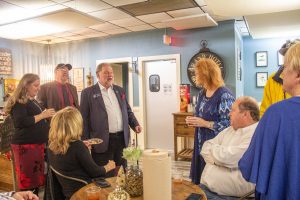 REBECCA HAZEN/Dade County Sentinel
Jeff Mullis, (middle left) speaks to local community members during his meet and greet in Trenton on Wed., Dec. 8. Mullis spoke to citizens about the important issues for Dade County and Georgia.

Senator Jeff Mullis held a meet and greet with his constituents at the new Birdy Bistro restaurant in Trenton on Wednesday evening, Dec. 8.

Citizens gathered to hear Mullis talk about the ongoing issues that are important to Dade County, and what he plans to work on next year when the legislature is in session again.

“I’m just trying to find out what the local officials are doing. I want to find out if there is anything I can do to be more active in the community, to help in any way I can,” Jimmy Klitzke, a Trenton community member in attendance, said.

“I retired a couple of years ago, and I am out of the loop. This is all about getting the information for me,” John Bradford, from Trenton, said.

Mullis told the community members that these meet and greets are all about getting to know people and forming relationships.

“I look forward to working with the local elected officials to help them improve the quality of life of Trenton and Dade County, and all of northwest Georgia,” Mullis said.

Mullis thinks some of the most important issues currently are reducing the tax base, working on reducing income tax, and preparing for the future in terms of economic development and safety.

“We need to make sure that Georgia decision makers know that Dade County is at the top of their list, and make sure that they are being taken care of,” Mullis said.

Mullis also spoke about the issues that he plans to work on in the legislature next year, including presenting a bill that makes it so that COVID-19 vaccinations cannot be mandated by the government.

“I am not against vaccinations. I’ve had three of them. But I don’t think the government should make you. If you work for a private enterprise, that’s different. That company has a right to decide what they are going to do,” Mullis said.

Mullis also wants to make sure that critical race theory is not taught in Georgia schools.

“We’ve got a lot of great educators, and we need to teach real history and not try to be so politically correct,” Mullis said.

Mullis also plans to work on legislation for constitutional carry, and the budget.

“The budget is always the most important thing, to make sure that our priorities fit the priorities of people like in Dade County,” Mullis said.

Mullis also said to keep an eye on McLemore, the golf club on Lookout Mountain, noting that the expansion will have a positive effect on Dade County.

“Their golf course – they are making money. They are about to build a resort, and they will expand with shopping centers on top of the mountain. This is not a Walker County deal, especially with Dade County being so close. It will be a $200 million project with 250 jobs. There will be a ripple effect. People will have to go through Dade County to get their food and get their gas,” Mullis said.

Currently, Mullis is the Senator for Dade, Chattooga, Catoosa, and Walker counties. Mullis noted that he will soon become the Senator of the people of north Floyd County, due to what he believes is a miscount of people in the Census.

“The census negatively counted us. We all think that we should have had a positive count,” Mullis said. “There are many people who did not fill out their census forms. Because they didn’t fill it out, that affects federal dollars.”

For more information about the Senator, and how to contact him, visit jeffmullis.com.