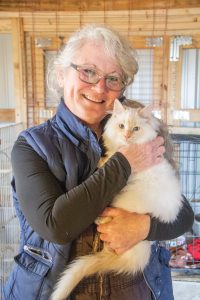 REBECCA HAZEN/Dade County Sentinel
Debbie Mansberger, holding Marshmallow the kitten, started Mastering Love Rescue this past summer. So far, she has provided 13 kittens with a home.

Debbie Mansberger never expected to start her own animal rescue, Mastering Love Rescue, and help rehome kittens, but she knows that she has found her calling to help animals in need.

The name “Mastering Love Rescue” starts with a story about a goat. The previous summer, Mansberger, who also owns a herd of goats, had lost a baby goat named Jericho. A lot of friends and family were following Jericho’s care.

Mansberger noted that when Jericho died, it was a rough loss. She took him to Dade County Animal Hospital to be euthanized.

“When the doctor went to give him the shot, he started fighting. In that moment, I wanted to say, ‘Stop, no!’ I knew it was my own selfish heart not wanting to let him go. I shared that in a post with the people who had been following along,” Mansberger said. “One of my friends from high school said I was ‘mastering love.’ Almost immediately I thought, that would be a good name for a rescue.”

That was in August of 2020. The next spring, one of her feral cats had kittens. She caught them and found them homes. Not too long after that, she saw someone had posted online that there was a kitten, and would anyone take it? She took it home and found it a home immediately.

On Fourth of July weekend, two sibling kittens came to her, which she named Stars and Stripes.

“That was the weekend that I said, ‘I think I’m going to have a rescue.’ I made a page on Facebook, and there it was. Within three weeks, I had 12 kittens. Within two months, at one point I was up to 30 kittens,” Mansberger said.

Since then, she has found homes for 13 kittens. Now, Mansberger has a 12×12 building on her property to house the kittens and the supplies needed to take care of them.

Mastering Love Rescue can be found on Facebook. If anyone would like to get in touch with Mansberger, she asks that they please go through Facebook. Her address is not listed, because she does not want animals to be dropped off.

“Even now, people are messaging me constantly to take animals, and I am having to say no for now,” Mansberger said. “I had never volunteered at a rescue. I had never done this before. I could just see that there was a need.”

Currently, Mansberger does not have rehoming fees, but she asks for donations.

Donations are always welcome, both monetary and supplies. Cat litter is always needed, in addition to cat food, bowls, litter boxes and blankets. On the Facebook page, Amazon and Walmart wish lists are listed with specific types of food and litter, in addition to links to PayPal and Venmo accounts.

Mastering Love Rescue partners up with nonprofit Dade Animal Resource Team (DART) to help get the kittens spayed and neutered. Mansberger also has volunteers who have offered to help.

“There was one point I was putting in 19 hours a day. I finally found my groove though,” Mansberger said.

Right now, Mansberger has one rescue dog named Cinnamon, and she hopes to expand and have a space for dogs as well. She also hopes for Mastering Love Rescue to become a 501(c)(3) nonprofit in the future.

“Our plates are full, but it’s a good full. We are blessed,” Mansberger said.