Sgt. Hailey Smith and Sheriff Ray Cross with the Dade County Sheriff’s Office spoke to the community about the recent spike of overdoses in the county during the weekly county update on Thursday, Dec. 2.

“This is just devastating our office. I had a girl that passed away the other day from a drug overdose. She was in Jackson County when this happened, but she has been in our jail several times. She was very young. That night, there were also two other girls that passed away in relation to these drugs. Fentanyl was the main source,” Cross said.

Cross noted that detectives have checked statistics, and several people had died in Dade County recently due to drug overdoses.

“I talked to the coroner today, and we have five pending cases. She confirmed to me that four of those are drug related,” Cross said.

Cross said that there have been 39 confirmed overdoses in 2021.

“Folks, we need your help. If you see any kind of drug activity going on, please let us know,” Cross said. “I am sending a message to the dealers. You better stop. You better not come to Dade County. We are fed up with it. We are not going to tolerate that here.”

“We do have compassion for those that have fallen victim. But we are very aggressive about the drug traffickers. We do not want that here,” Smith said.

The Substance Abuse and Mental Health Services Administration has a national helpline at 1-800-662-4357.

In other news, Kristy Lawson, Executive Director of The Sexual Assault Victims Advocacy Center, noted that there is now a Dade County office, as well as a thrift store. 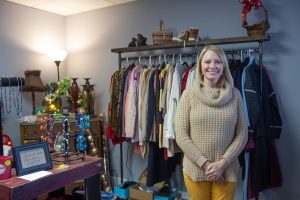 “We have been providing this service to Dade County for many years, but the victims have had to come to the main office in Fort Oglethorpe. Now, I am excited to announce that we have a space here in Trenton. It is located in the Gross Shopping Center. We also have a thrift store that will help us maintain that space. We hope that the thrift store will benefit the community as well,” Lawson said.

The thrift store, named Sacs Thrift Avenue, opened last week. All donations are tax deductible. All proceeds benefit the center and the served victims. The store is open on Thursdays and Fridays from 10 a.m. to 6 p.m. and Saturdays from 10 a.m. to 3 p.m.

Jennifer Blair and Peter Cervelli with Scenic Dade Corporation gave an update about the ongoing construction of Town Creek Trail.

“A new trail is being built, and Scenic Dade is the prime mover in that. The corporation was developed about three years ago,” Cervelli explained. “About 10 years ago, I had a discussion with Ted Rumley to talk about potentially doing a trail along town creek trail … What you are seeing now is the beginning of that trail that will start extending from Jenkins Park. That is only part one.”

Cervelli continued, “To complete this project, the goal is to use private money, not government money. This will cost an estimated $250,000.”

For more information, and to contact board members, visit scenicdade.com

Dade County has seen 22 cases in the past two weeks, for a total of 1,860 COVID-19 cases. The number of cases can be found at https://dph.georgia.gov/covid-19-daily-status-report.

To make an appointment for a vaccine or a booster at the Dade County Health Department, or for questions, call (706) 657-4213.