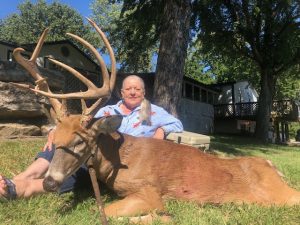 Donna Blaylock Jones shot and killed an almost 300 pound buck in Mound City, Kansas. Her and her son James Blaylock have a goal of trying to get a Boone and Crockett deer.

Donna Blaylock Jones has been waiting for 31 years to bag a large whitetail deer, and in late September, in Mound City, Kansas, she and her son James Blaylock struck it big. But she hasn’t achieved her goal just yet.

Jones would hunt with her cousins, but they would also hunt deer as well. Around 1988, they asked Jones if she would start going deer hunting with them.

“All I’ve ever hunted with was a 12-gauge shotgun. I’ve never tried to do it. One of my cousins said, ‘I will take you and show you what to do.’ I just fell in love with it. I hunted for two years before I shot my first one. And it was the biggest one I have ever seen,” Jones said.

Jones had the head mounted. The woman that mounted the head said that at the time it was the biggest deer she had seen locally.

“I have hunted ever since then for deer season but never seen one bigger than that. I always kill a doe every year. I gut it and skin it and everything else myself,” Jones said.

Jones continued, “Last year, my son James said, ‘Mom, I want you to kill a Boone and Crockett deer.’ They score the deer according to the size of the rack. It has to score at least 150.”

Jones’ son is helping her achieve this goal by going hunting together in Ohio, Kansas, Illinois, Iowa, Missouri and Wisconsin. Last year they went to Ohio but came away empty.

This year’s trip was to Kansas, where they hunted for four days before she saw the buck she wanted.

“On the fourth day, Wednesday evening, all of these deer were coming in,” Jones said. “We were in a ground blind, which I’ve never been in before. This is muzzle loader season, which I’ve never shot before. My son loaded the gun for me.”

Jones continued, “About 7 p.m., five deer were coming in from the pasture. They got within 50 years and one buck raised his head up and he towered above the rest of them.”

Just then though, the corn feeder went off, and all the deer ran off. The deer eventually stopped, stood for a few minutes, and then turned back and started walking toward Jones and Blaylock in the blind. After that, Jones was able to get her shot.

“It was a slow process,” Jones said. “It was the biggest deer I have seen at the time, and I just didn’t want to pass him up.”

The deer was estimated to be about 300 pounds, which is huge for a whitetail deer, Jones said. After the fact, when Jones showed her friends and family pictures, everyone asked if it was a larger mule deer.

The deer was just under Boone and Crockett classification. It was estimated that the deer scored about 145.

“What amazes me, was I was looking for a Boone and Crockett deer. Everyone kept saying, ‘You don’t realize how big of a deer you’ve got.’ I guess I don’t. Ever since we’ve gotten back, I’ve been watching hunting videos, and none of their deer are as big as this one,” Jones said.

Jones is having this deer mounted, just like she did with the large whitetail buck she shot 31 years ago. She’s looking forward to the chance for a Boone and Crockett deer during next year’s hunting trip, with more hunting in between.

“He’s taking me turkey hunting in April; we are going back to the same place,” Jones said.