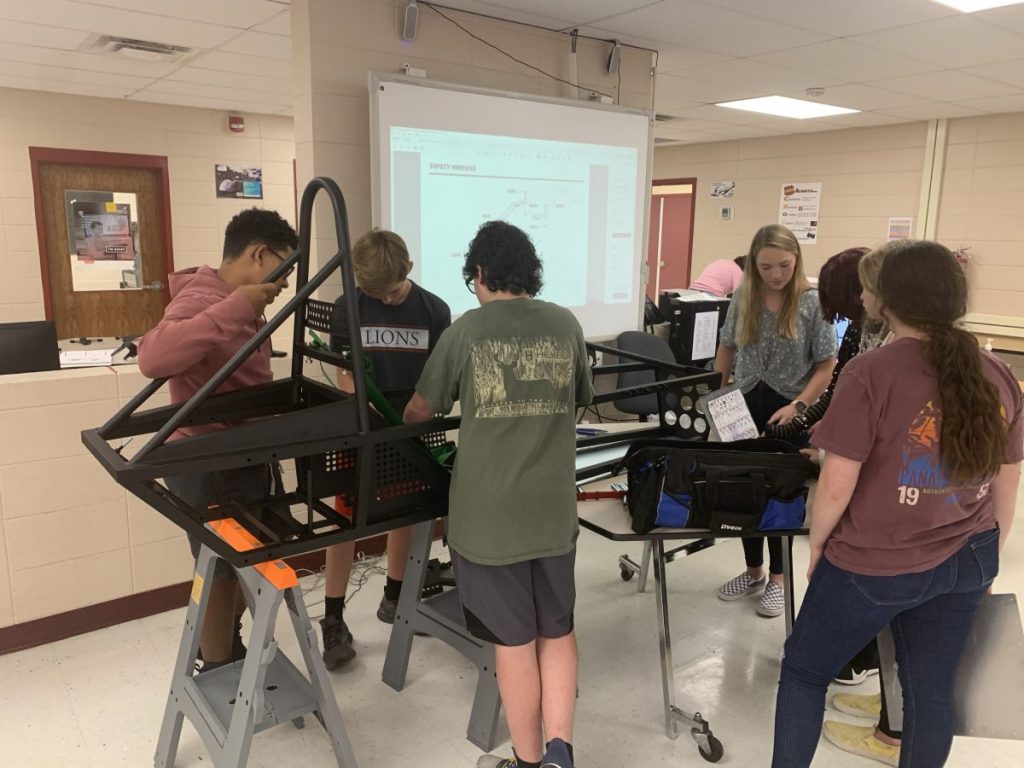 Photo courtesy of Shenea Hill
Students in Jimmy Gallman’s class are working on building an electric car all semester, part of Green Power USA Foundation. The students will enter the car in a local race at the end of the school year, with the goal of driving it the furthest in 90 minutes.

Eighth graders at Dade Middle School in the technological systems class are learning every aspect of building an electric car, with the goal of putting those skills to the test in a race this spring, part of Green Power USA Foundation.

“Green Power USA is a high-functioning STEM program,” Shenea Hill, Director of Career and Technology Innovation, said. “The students get well rounded in the whole aspect of the whole process – research, design, all the way up to the final product. It builds on their employability skills because they have to work in teams and do outreach, presentations, and documentation.

Green Power was founded in 1999 in the United Kingdom. It was brought over as a pilot class in 2011 in Huntsville, Ala., city schools. The class was such a success that a nonprofit foundation was brought to the United States, which created Green Power USA Foundation.

The entire class revolves around building an electric car from start to finish.

“We still have a lot of work to do to it, but it’s functioning. We’ve driven it around the school a few times,” Jimmy Gallman, Engineering Technology teacher, said.

According to Gallman, the process is nothing like any other class that they have been in. The students have to learn and go through every detail of putting the car together, from how to use the proper tools and how to read schematic diagrams for the wiring.

“There’s so much that goes into it. Right now they’re looking at 3D printing a steering wheel. They have to be able to visualize how it’s all going to come together,” Gallman said.

Also, as part of the class, the students need to reach out to local businesses and people, asking for sponsorships. If a business donates, the class will make a decal sticker for them that will be put on the finished car.

“They are learning how to talk to businesses. People skills is a big part of it. The more money that we get, the better stuff we can get for our car,” Gallman said.

Student Jonathan Mashburn said that he was “pumped up” when he found out that the program was at the middle school.

“My dad and I work a lot on little engines, like weed eaters, dirt bikes and go carts,” Mashburn said about his interest in joining the class.

Hailey Gerrells joined the class because she wants to be an engineer when she gets older.

“I thought that this would be the perfect class to take to pursue my dreams,” Gerrells said.

Gerrells also said that the electrical work of the car has been her favorite part of the class.

“Specifically, the horn, because the horn sounds hilarious,” Gerrell said.

When the car is finished, the students will be able to enter it into a local Chattanooga area race this May.

The goal of the race is for the car to run the farthest in 90 minutes on two batteries, and the teams have to have three different drivers during that time.

Hill says that out of 50 cars in a race, there might be only 10 that finish the full 90 minutes.

“The rules state that the batteries and the motors have to be the same. The kids can alter anything else that they want to make the car faster. There is a lot to it. There could be drag in the wheel. There could be a brake that doesn’t completely release. A driver could weigh five pounds more than the other drivers,” Hill said.

Hill says that, in the future, she hopes that sixth and seventh graders will be able to take the class, and she would like to take the program over to the high school as well.