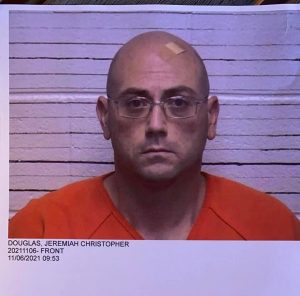 Update — Leea Abigail Raines, 23, has been identified as the victim.

Jeremiah Douglas, 40, a registered sex offender in Georgia, has been arrested and charged with felony murder and probation violation, and is being held in the Dade County Jail after the murder of a 23-year-old woman, on Friday morning, Nov. 5.

According to multiple witnesses and surveillance video from local businesses, Douglas pushed the victim, whose name is still being withheld, out of a moving vehicle on Highway 299, near Pope Trail.

“On Friday, Nov. 5 around 8:37 a.m., Dade County deputies and Dade County EMS responded to the 1200 block of Highway 299 in Wildwood, for a female body in the road,” Sheriff Ray Cross said. “Upon arrival, the body was found, and crime scene established. EMS verified that the female was deceased, and the Dade County Sheriff’s Office investigators notified Georgia Bureau of Investigation (GBI) and began securing witnesses and other evidence.”

The Sheriff’s Office is waiting on the GBI crime lab’s verification of the victim before releasing her name.

There was no vehicle near the scene, but a witness saw the crime as it was taking place. Douglas fled the scene. Surveillance video collected led the investigators to the vehicle, which then led them to Douglas.

The investigators executed an arrest warrant for felony murder within 24 hours of the reported crime. A quick arrest was possible due to witnesses and video.

Douglas, who resides at Patterson Drive near Wildwood, is on Georgia’s Sex Offender Registry, and he was on parole at the time of the incident. Douglas awaits a bond hearing to be held in front of a Superior Court Judge. The Georgia Department of Community Supervision has also executed a parole violation warrant where no bond is available.

Douglas and the victim reportedly knew each other, but the relationship, and a motive, is unknown at this time.

“I can’t give enough thanks to the Georgia Bureau of Investigation, Joe Montgomery, and all of his guys. What an exceptional job they did … A lot of these guys were up 30 something hours without any sleep,” Cross said.

GBI Assistant Special Agent in Charge, Earl Glover, said that the investigation was a joint effort.
“We all worked together to try to bring closure to this case as soon as possible,” Glover said.

Cross noted that the press conference was originally scheduled at noon but did not start until 12:30 p.m. because more witnesses gave their testimony, which was vital to the investigation.

“There’s no reason for this,” Cross said. “Stuff like this is what we are going to stop from happening in Dade County. I am very upset over this. A family has been damaged because of this piece of trash.”