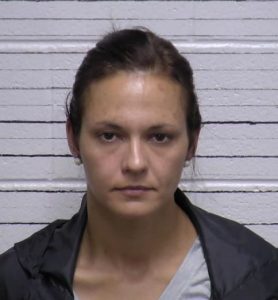 Amanda Pardue, a registered sex offender in Trenton, was arrested Tuesday, Oct. 26, after she volunteered at the concession stand during the Dade County High School homecoming football game on Friday, Oct. 22.

Pardue was charged in 2019 after sending explicit texts and Snapchats to minors. She was a Dade Middle School substitute teacher at the time. According to Public Information Officer Sergeant Hailey Smith, with the Dade County Sheriff’s Office, as of Monday morning, Nov 1., Pardue is still being held at the jail, and she is not eligible to bond out. The next step will be for her to wait for an arraignment through the Superior Court.

A Dade County Sheriff’s Office press release reads, “On October 26, 2021 at approximately 8 p.m., a warrant for offender Amanda L. Pardue was executed by the Dade County Sheriff’s Office. The warrant is result of a thorough investigation into complaints received by our Office in regards to a sex offender working in the concession stands of a high school football game.”

“Probable cause was determined to affect an arrest for Amanda Pardue as she knew, or should have known that her actions on Oct. 22, 2021 were in violation of the State Sexual Offender Registry. In addition, a warrant issued by the Department of Community Supervision has also been executed for Felony Probation Violation. Offender Pardue is currently in the Dade County Jail awaiting a First Appearance Hearing.”

In 2019, the Sentinel reported that Pardue pled guilty and was sentenced to 10 years’ probation, and a $5,000 fine on four counts of computer pornography. She also had to complete 90 days in the Detention Center program.

Pardue is subject to Special Conditions of Probation as a sex offender. She had to enroll and successfully complete a structured, cognitive–behavioral out–patient sex offender treatment program.

She is barred from using SnapChat, apps or any other social media programs that will erase messages, photographs and postings automatically. She is also banned from having any contact with any of the victims.

According to Pardue’s court records, Pardue sent both SnapChats and text messages to three 14-year-old boys, involving explicit verbal description of her desire to have sexual intercourse and sexual conduct with said children.

Her conditions of probation include the following:

“You shall have no contact, whether directly in person or indirectly through any means of communication, with any child under the age of 18, no with any person unable to give consent because of mental or emotional limitations. Neither shall you attempt contact with the aforementioned except under circumstances approved in advance and in writing by the court. If you have incidental contact with children, you will be civil and courteous to the child and immediately remove yourself from the situation.”

“You shall never drive alone where children are commonly known to be, especially through parks, playground and school zones.”

A Dade County Schools press release said, “In order to ensure the safety of our students, the school system currently has protocols in place for parents and community members that volunteer in the classroom. As a result of last Friday’s incident, we are in the process of examining our procedures for volunteering during extra-curricular activities and will establish additional safety protocols to prevent a similar incident from happening in the future.”

“No visitor comes into the school without checking into the main office. Since the pandemic, we haven’t even had volunteers in the classroom. We haven’t really had to worry about that since spring of 2020. For someone to volunteer in the classroom, the principal has to sign off on it, and they have to register with a school resource officer,” Superintendent Josh Ingle explained.

Ingle continued, “I have spoken with the athletic director and with Mr. Fahrney. Currently before each season, the coaches have a parent meeting before the season starts. During that meeting they review expectations. Coach Cooper and I have agreed, and we are in the process of developing a form, to review expectations for volunteering. We will have it reviewed by legal counsel. Ultimately, our goal is to establish a procedure to ensure that it doesn’t happen again.”

According to Ingle, Friday night was cross country’s night to man the concession stand. On Friday, cross country Coach Philip Bell told the students to remind their parents that it was their turn to volunteer.

“A football game is an unstructured event. You have kids, parents, community people, law enforcement, lots of people. She put herself in this position. I have to assume that she probably knew what she was allowed or not allowed to do. But I don’t know that. But at the end of the day, the adults have to be accountable for their own actions,” Ingle said.

Ingle said that, according to his understanding, Pardue was not in the concession stand during the whole game. At some point, she left and sat in the stands.

According to Sergeant Hailey Smith, they were not made aware of the incident right away, either.

“I was actually present the whole night, and there were other officers working because it was homecoming. We were never made aware. A lot of us found out through Facebook. That’s how it happened. No one spotted her or IDed her that night,” Smith said.

Smith continued, “What we do know for a fact is she was volunteering with disregard, and she knew better. She is allowed to be at school events for her children, and that’s it. No forms of volunteering, working, or extracurriculars.”