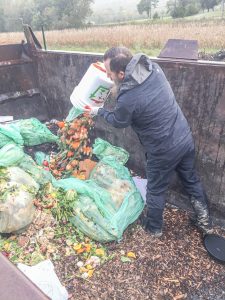 REBECCA HAZEN/Dade County Sentinel
Michael Ryan empties buckets of food waste into a large repurposed dump truck bed, where the food starts to break down in the composting cycle. NewTerra Compost was recently awarded $7,500 to implement a trial composting program in Chattanooga.

Composting business NewTerra Compost, located in Wildwood, was one of the winners of the Sustainability and Recycling Pitch and Pilot Competition, part of the Startup Week Chattanooga event.

Normand Lavoie and Michael Ryan, co-founders of NewTerra Compost, presented a nine-page idea pitch for a trial composting program to be implemented.

“It is a trial program that could prove something bigger could happen,” Lavoie said. “We were reached out to, because of us being a recycling company. They wanted to hear our ideas and ways to innovate,” Lavoie said.

The four submission winners, including NewTerra Compost, presented their pilot program ideas earlier this month on how to better Chattanooga’s recycling program.

As one of the four winners, they were awarded $5,000 to implement their two-month curbside composting trial program for 100 city homes.

“We thought that we had a good idea, and we know composting is part of solutions. There was a curbside pickup pause [in Chattanooga.] That got everyone worried about recycling plastics, cardboard, and those kinds of materials. They should be. But, when you look at the statistics, organics are the largest component of trash. We don’t even address it at all on a big scale,” Lavoie said.

At the event, NewTerra Compost was selected as the audience’s choice award winner, which awarded them an additional $2,500, to be put toward the program.

“We are already almost at capacity on the trial, just by word of mouth and social media,” Lavoie said.

Lavoie said that their goal for the pilot program is to prove that trash does not need to be picked up every week, and that when someone composts, they can reduce their volume, and make it not smell.

“I do it at home and it works for me. It does not smell. But I am a composter. You might not fully believe me. If I can get 100 homes to get on this program and see how it works, I think that is the catalyst for change in the area,” Lavoie said.

Lavoie continued, “Will Chattanooga start composting on a bigger scale? I am not sure, but I think it can be something that our whole area looks at. A huge amount of money is being spent on trash pickup every week in cities.”

NewTerra Compost has been in business for about a year now and is continuously growing, adding new residential and commercial customers every month.

“When we get folks in, we really focused this year on training and education, and making it a successful implementation at their site,” Lavoie said.

NewTerra Compost has also become the primary sponsor for Ecological Decisions for a Global Environment (EDGE), a student lead organization at University of Tennessee at Chattanooga (UTC). EDGE is holding a pumpkin drive, which NewTerra Compost will help with.

“After Halloween there will be three drop-off locations on the UTC campus, in addition to three satellite schools. We’d love to do something with Dade, too,” Lavoie said.

The pumpkins will be collected in containers. NewTerra Compost will then compost some of the pumpkins and give some of them to farmers for feed.

“We’re doing great. Business has been great. We have a lot more people that are starting to do it. We keep trying to do as much as we can with Dade County. This is our home, we are a Dade County business,” Michael Ryan said.

“We are having fun right now tweaking the process and making adjustments. It’s awesome to see that compost coming out. We are working more, and we’ve got extra help with drivers now,” Lavoie said.

Residential homes that sign up get a five-gallon bucket. Kiosks to drop off composting buckets are in nine locations around the area, with two of them in Dade County, at the Wildwood Depot and the recycling center.

Restaurants and other commercial businesses are given large containers. The filled containers are swapped out once or twice a week for a clean, empty one.

To sign up for the composting service, and to find more information, visit www.newterracompost.com.