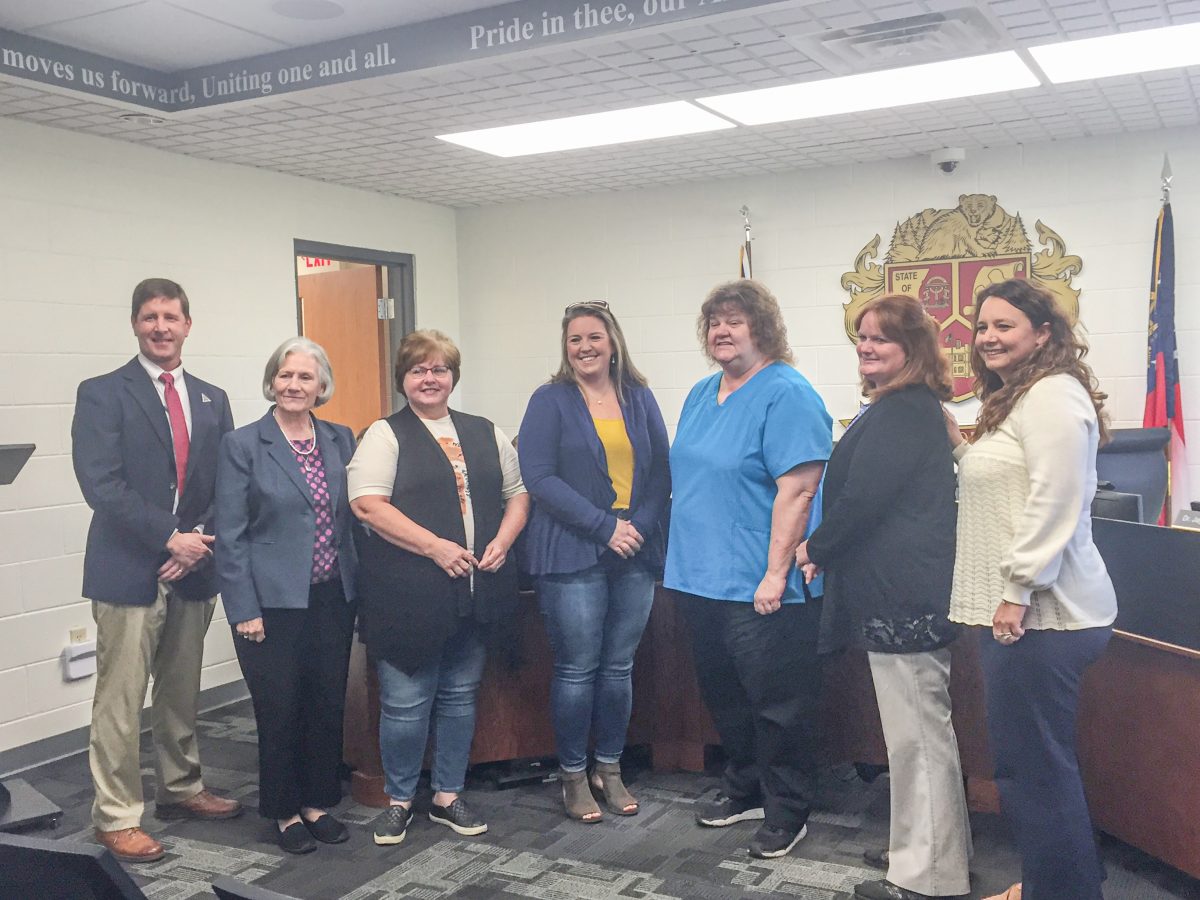 The Dade County Board of Education recognized school cafeteria managers and members of the nutrition team, as well as transportation workers and supporters of the schools during the Monday, Oct. 25 meeting.

“We have the best cafeteria staff in the whole state of Georgia,” Ingle said. “I want to recognize you all for your tireless effort and for giving your heart and soul to the students.”

In addition, School Social Worker Kristin Barrett recently spoke to local churches and faith-based organizations about the school’s non-instructional needs, or Care Closets. Barrett noted to Ingle that she was overwhelmed with all the support.

“I want to thank all of those that support Dade County Schools. We are blessed to be a part of this school district that has such thoughtful and caring supporters,” Ingle said.

Also, during the Board of Education meeting, the board heard multiple department reports.

Kristin Barrett reported that there has been 15 home visits so far during this school year. These home visits are generally welfare checks, such as finding out why the student has been absent.

Barrett said that the school system was awarded a Governor’s Office of Student Achievement (GOSA) grant in 2019, in the amount of $39,249, to help alleviate attendance issues because of lack of access to basic essentials.

“We are finishing up that grant, and we are getting ready to send out the final reports. All the Care Closets are completely stocked. We worked with the schools to find out exactly what their closets were missing and what we needed to go purchase,” Barrett said.

Barrett continued, “I have had the pleasure and honor of going to several churches to talk about this grant, and they have provided funds and donations and support for us to help us continue this. Our care closets will continue without this grant, which is a huge blessing.”

Barrett also noted that a possible resource fair is in the works, for special education students who have graduated from high school.

“This is an excellent grad rate compared to the state rate. We had so many seniors who had no choice but to quit school and start working because their families’ lost jobs,” Johnson said about the past year.

Johnson spoke about MTSS, or multi-tiered system of supports. The elementary and middle schools are participating in this. In the first year, all schools trained and self-evaluated using the state rubric.

In the second year, there have been frequent virtual meetings with coach Andrea Eller. Within each meeting, school teams are evaluating what they have accomplished and what are some next steps to work toward.

Johnson said that there are three years of training, and once that is through, the trained members can train members of the high school.

Johnson also spoke about Positive Behavioral Interventions and Supports (PBIS). There is a full implementation of PBIS by all schools this year. All schools have completed the Self Assessment Survey. All teams meet monthly and will be required to have a written plan.

“We are all strongly Tier I schools. The district team is considering Tier II training to begin this fall and complete for next school year. It’s taking it another step further with training,” Johnson explained.

Chris Greene, Director of Information Technology and Network Services gave an Emergency Connectivity Fund (ECF) update. Dade Schools were awarded $510,875.00 in funding for their 2021-2022 ECF Round 1 request, which was for the replacement of 1,675 Chromebooks that are reaching their end-of-life status as of June 2022. The vendor will bill ECF and the schools will never receive a bill for this purchase. The Chromebooks will start to come in toward the end of October. Life expectancy of the Chromebooks is about five years.

Susan Reyes, Director of Special Programs and Pre-K, reported that Dade County High School has 296 students with IEPs (Individualized Education Program). This includes 111 students in Dade County High School, 63 in Dade Middle School, 92 in Dade Elementary and 30 in Davis Elementary. There are a total of 26 special education teachers and 29 special education paraprofessionals.

Paula Stallings with the Finance Department gave the financial report.

“We finally have the June 30, 2021 closeout. We ended really well. Every year we have always worked so hard to have more money coming in than going out. We were able to accomplish that,” Stallings said.

The Board also approved the schedule of 2022 board meetings. The board meetings will continue to be held on the fourth Monday of each month at 5 p.m., except for the months of Nov. and Dec., due to the holidays.

The board went into executive session to discuss personnel. The board approved the hiring of Caroline Hurst as a paraprofessional, and Megan Baugh, Jessica Guthrie, Carson Rogers and Megan Nicole Williams as substitute teachers. Also hired was Becky Smith as a substitute cafeteria worker and Allanah Gray as an Aftercare employee. Also approved were Buddy Durham as Head Basketball Coach and James Emmett as Assistant Basketball Coach for Dade Middle School.

The next Board of Education meeting will be Nov. 15.