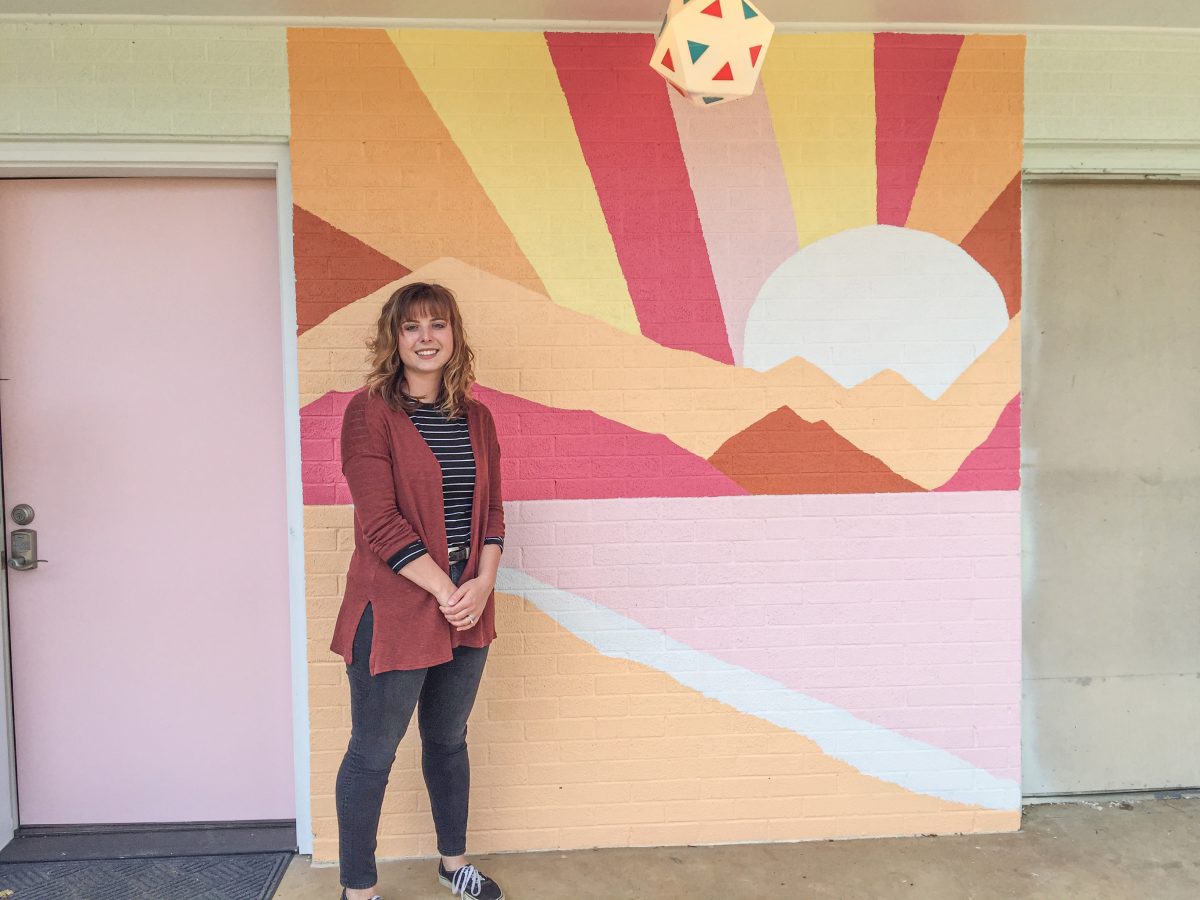 REBECCA HAZEN/Dade County Sentinel
Local artist Keeley Farmer has been painting windows of local businesses in Trenton. Recently, she painted murals at the Groovy Nomad motel, pictured here, which is in the process of being renovated.

The paintings of local artist Keeley Farmer are dotting local businesses windows, in addition to new motels, right here in Trenton, as well as in both Tennessee and Alabama.

Keeley Farmer has lived in Dade County her entire life, and she graduated from Dade County High School. She works at Dade Middle School as a paraprofessional, and she is currently attending college with the goal of becoming a teacher.

“I have been painting for seven years,” Farmer said. “What really got me into painting was teaching painting classes when I was 16, which was done on the side for fun. I taught at the Artzy Café before it closed, the first time.”

Farmer said that she has always doodled and painted, and when the opportunity was given to her to teach painting classes, she dove right in.

A little over a year ago, she started window painting for businesses “on accident.”

“I had been contacted by a girl I went to school with, and she works at the Fort Payne McDonalds. They wanted their windows painted and wanted to know if I could do it. I said, ‘Let me do some research and see what I can do.’ I watched a couple of videos on YouTube,” Farmer said.

Farmer uses water based acrylic paints, which she buys at WalMart. The paintings can last up to four months long, when kept out of the weather.

“I can paint from the inside, but it’s difficult because it’s backwards. I only do that for places that don’t have awnings. I start out with a white base. I freehand everything. Sometimes I pull up an image on Google,” Farmer said.

Now, her window paintings have been on business windows from Hixson, Tenn., to Rainsville, Ala., and in-between.

Locally, her work has been at Sun Dog Grooming, Sweet Tees, Smalltown Nutrition, and the Dade County Sentinel.

In addition to the window painting, she has also put her designs on t-shirts as gifts for her family, and she does canvas paintings. She also draws, and she drew with chalk for the first time at the Uncle Lar’s Spring Fling sidewalk chalk competition.

One of her bigger art projects was painting the murals at the Groovy Nomad, a motel on Highway 11 in Trenton that is in the process of being renovated.

“Ryan [the owner] had approached me with ideas that he had and what they had wanted. They let me pick the color swatches. I tried to keep it as close to what they wanted because they had a color palate in mind, which was orange, yellow and blue to match the light fixtures they had,” Farmer said.

Farmer continued, “They want and encourage people to come and to take pictures with the murals.”

Farmer said that it makes her proud to drive down the road and see those murals at the Groovy Nomad.

“To be honest, I was going to quit window painting, but my husband pushed me. I ended up getting more people that wanted it,” Farmer said.

Farmer noted that she’s quite busy, being a wife, working full-time, and going to school, in addition to being an assistant sideline cheerleading coach at Dade Middle School, and having a cat, a dog and chickens.

“I’m just going to go with where this takes me,” Farmer said.

Farmer says that the local artists that she looks up to are her Pawpaw Don Moreland, Brandi Gann, Heidi Wilson and Ken Pennington.

“I was given the opportunity young and encouraged by my Pawpaw J.L Page to paint the walls of his scrap yard in Rossville,” Farmer said.

Farmer continued, “I look forward to painting more. I’m not sure where God is going to take me with it, but if he’s brought me this far at 22 I’m sure there are greater things in store. I’ll just keep working towards that.”