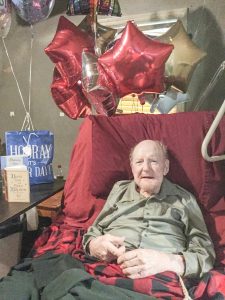 Both Hubert and family members reminisced about the old days, and his long life. Hubert was born in 1921 in Albertville, Ala. He has three brothers and four sisters, two of which are still living, both younger than him.

He was in the Army, during WWII. He was stationed in Corpus Christie, Texas, where they were tasked with guarding prisoners.

“Him and some of his buddies had gone down to a body of water for swimming. He got out of the water and laid down and got bit by a cottonmouth. He tells that story over and over again,” Larry Cooper, Hubert’s son, said.

Hubert was a welder at Combustion in Chattanooga, Tenn., for over 30 years. Hubert was also a Dade County Constable for eight years.

He left Combustion and was retired for a few years, but then decided he needed something to occupy his time other than fishing, so he worked at the Cooper Hosiery Mill in Fort Payne for another 25 years.

Hubert was also a member of the Masonic Lodge for about 60 years. He loved to fish, taking his sons and his nephews out fishing on Nickajack Lake. He also enjoyed putting feed out for the deer, to watch them eat.

“We used to go to the farmers market in Chattanooga every year. We grew something different every year. Usually it was corn or green beans. We would sell it up there,” Larry said.

Pam Greulich, Hubert’s granddaughter and Larry’s daughter, noted that Hubert’s drivers license was taken away at age 93 and it just devastated him. He had been known both in Trenton and Rising Fawn for driving a maroon or white Dodge truck.

“He would hold up the traffic. He did 35 miles per hour, it would take him an hour to get to Trenton. Everyone would say, ‘Oh gosh, there’s Mr. Cooper,’” Pam said.

As family and friends gathered at Larry’s house, where Hubert lives and is being taken care of, they pulled out old family photos for Hubert to look at, including photos of him as a baby, with his grandfather. Hubert was raised by his grandparents. They also looked at photos of him and his wife, Elise Mae, at their 50th wedding anniversary.

“We got the city bus and rode out into Rossville, and that’s where we got married,” Hubert said.

A story that has been told to all family members was that Elsie Mae had to pay for the bus ticket to get them to the church, because Hubert did not have the money.

“And he’s been spending money ever since. If he had a dime in his pocket, he was going to go to Trenton to spend it,” Pam said.

Hubert and Elsie Mae were married in 1942, and were married just shy of 57 years. They had three children of their own. Hubert now has seven grandkids, 20 great–grandkids, and 17 great–great–grand kids, plus two more on the way.

At one point during the festivities, members of the Dade County Sheriff’s Office and the Trenton-Dade Fire Department drove by the house, honking their horns and blaring their sirens. Family members went outside to record the little parade, to show Hubert later.

“My papaw is going to love that,” Pam said.

They say that the way to a man’s heart is his stomach, and that rings true for Hubert. When asked how he feels about being 100, he said, “It feels pretty good. I’d feel better if I had something to eat. When are we going to eat?”