Ida made landfall on the Louisiana coast on Aug. 29 as a category 4 hurricane.

Two volunteers from each department received assignments to go to different parts of Louisiana, and they went with fire tanker trucks, or fire tenders, which are trucks with large tanks of water. The volunteers first went to FEMA’s basecamp in Thibodaux, to wait for their assignments. 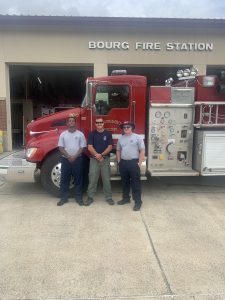 B.J. Hartline is the Assistant Chief of West Brow Fire and Rescue, and he was one of the volunteers to go to Louisiana.
“I was a volunteer in Dade when the tornados came through our area. I saw the destruction, and what happens when a natural disaster occurs. Being able to go help during a similar type of event, it is just something that we should do. I knew they needed help and we were available, so let’s go,” Hartline said.

West Brow Fire and Rescue was assigned to Coteau, La., where they helped with all of their 911 calls for the two weeks that they were there.

“We ran about six or seven calls when we were there. We had some carbon monoxide calls, because everyone is running generators. We had a brush fire where they had been piling up debris, and some medical calls,” Hartline said.

“In Coteau, there was roof damage, over turned trailers in trailer parks, debris, and power lines down everywhere,” Ferraez said.

According to Hartline, normally the Coteau Volunteer Fire Department has three paid individuals, Monday through Friday, for eight hours a day. While they were there, the workers were swapping 24-hour shifts. They were also with a crew that was volunteering from Randolph County, Ga.

“Some of their volunteers, their own houses were tore up or gone, but they took care of us, they housed us, and fed us. We did anything we could for them and the community,” Hartline said.

“We were able to spare resources. We are here to help people. That is just something we like to be able to do,” Ferraez said.

On the last day of their assignment, Hartline and Ferraez helped haul water to Grand Isle, La.

“That was one of the hardest hit areas. They were buried in couple feet of sand and water still. We talked to some locals, and they said in terms of damage, Ida had done a lot worse than Hurricane Katrina,” Ferraez said.

The Trenton-Dade Fire Department went to Louisiana as West Brow Fire and Rescue was finishing their assignment.

“West Brow was on their way back, and they called to see if anyone in the county would want to come. Two trucks had backed out so they talked to us. Georgia Mutual Aid Group (GMAG) sends out the requests,” Trenton-Dade Assistant Fire Chief Ansel Smith said.

According to gmag.org, GMAG is charged with managing statewide resources and coordinating deployments. GMAG is Georgia’s first line of defense for multi-jurisdiction public safety response to emergencies.

The Trenton-Dade firefighters were sent to Bourg, La., to help the Bourg Volunteer Fire Department.

“It’s a brotherhood. Even though they are far away, they are in the same line of work. If someone needs help, we will help even though we don’t know them. Fireman like to help out each other when they can,” Smith said.

Josh White is a firefighter with both Trenton-Dade and Catoosa County Fire Departments, and is one of the volunteers that went to Bourg. Firefighter Yabsera Alemayehu accompanied White.

According to White, they helped out the Bourg Volunteer Fire Department by responded to any call that the station was dispatched to.

“Their hydrant system was down, and they needed water supply. There were 2,000 gallons water in the engine we took,” White said.

“It’s a brotherhood in the fire service. We enjoy helping others out. We know deep down that if we called, the assistance would be returned, without any questions asked,” White said.

White noted that in Bourg, there was damage to just about every structure, for miles around.

Even though the Bourg Volunteer Fire Department members were no doubt busy worrying about their own homes and families, they still made sure that the volunteers were taken care of.

“They were generous to us. We didn’t have to cook or anything, they treated us very well, just a bunch of nice people. They showed us the meaning of brotherhood,” White said.