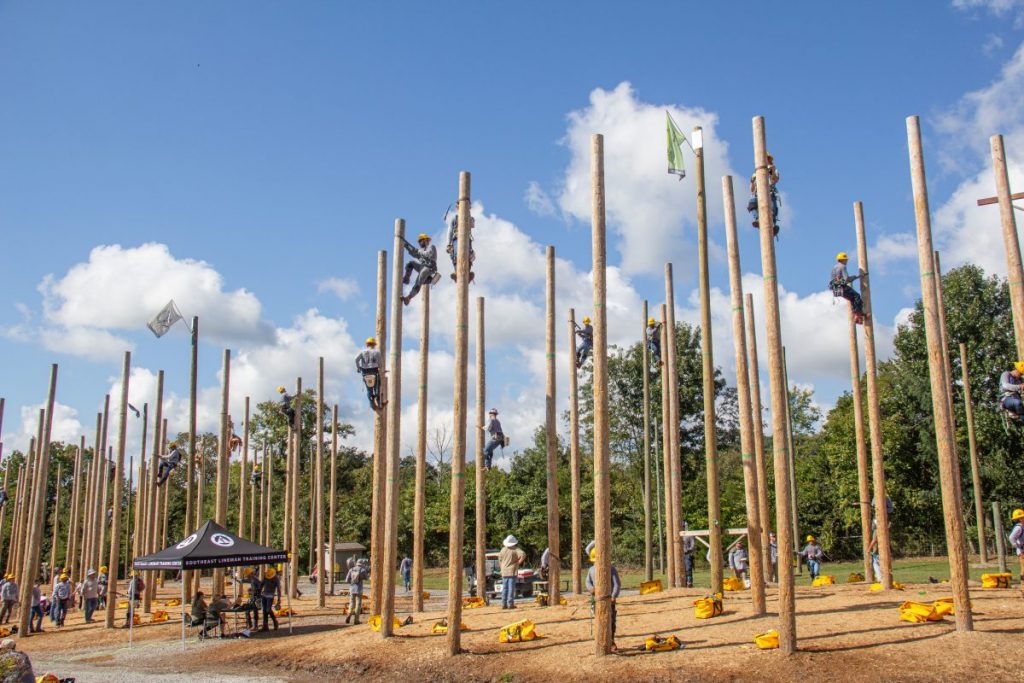 REBECCA HAZEN/Dade County Sentinel
The Southeast Lineman Training Center partnered with neverthirst, a non-profit organization based in Birmingham, Ala., for a Woodwalkers for Water Climb-a-Thon event on Friday, Oct. 8. The purpose of the event was to raise money for neverthirst, which brings clean water to underserved areas.

The Southeast Lineman Training Center (SLTC) was quite busy on Friday, Oct. 8, with hundreds of linemen climbing up poles over and over again. It was not part of their regular training, but instead, the Woodwalkers for Water Climb-a-Thon event, which was a partnership with non-profit organization neverthirst.

Neverthirst, based in Birmingham, Ala., provides clean and living water to unreached communities worldwide.

Jimbo Tucker is the Director of Partnerships with neverthirst. “SLTC has been raising funds. There is a donation given on their behalf for every pole climbed. They were able to raise money from friends and family as well,” Tucker said.

During the event, they were able to raise an additional $1 per pole climb. Including fundraising efforts before the event, SLTC was able to raise $29,000. At the end of the event, it was announced that the linemen climbed more than 6,000 poles.

Those donations in particular are going toward providing clean water solutions to villages in need in Uganda.

“They are demonstrating that they are the kind of organization that isn’t just training people for a job, they are helping to train them to be the kinds of human beings that care about others and serve others,” Tucker said.

Tucker continued, “These are the guys that, when everyone else is leaving, they’re going into the storm. Neverthirst is an organization, similarly, where we go to some of the hardest reached places around the world, to provide the basic necessity of clean water. 800 million people lack access to clean water.”

Lineman in training Andrew Mobley had climbed 15 poles as part of the event.

“This is pretty cool. I’ve never done something like this before. We’re helping people that we’ll never see, but it’s really going to affect their lives,” Mobley said.

Ali Atchley, is the Digital Marketing Specialist for SLTC. Atchley noted that there are no classes on Friday, so the event was all volunteer based.

“Being a lineman is a servant led job. Students, when they graduate here, they are going out into communities, and serving the people of those communities. I think that by having events like this, we are already teaching them that servanthood,” Atchley said.