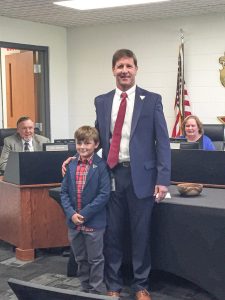 REBECCA HAZEN/Dade County Sentinel
Benjamin Lind was invited by the Board of Education to lead the Pledge of Allegiance, after a display of commitment, the character word for September, in the classroom.

In Bethany Miller’s class, the students learned about the word commitment, and watched an 11-minute video about the Medal of Honor.

“While that video was playing, Benjamin took it upon himself to stand up, in the middle of the class. He was the only one standing, and he was standing at attention, like a soldier would,” Ingle said.

“I meant it from my heart,” Lind told the Board of Education members.

Lind’s parents are Timothy and Amanda. Lind’s father served in the military, and Lind’s older brother is actively serving.

Lind was also presented a Pin of Excellence by Ingle.

Also during the meeting, Edna Moore, who is retiring after 40 years of service, was recognized by the Board of Education, as well.

“Ms. Edna worked in our cafeteria, and she was a bus driver. She was more than just an employee. She treated every one of these kids like they were her own kids,” Ingle said.

“Trenton Telephone is seeking our help as they submit an application to expand broadband Internet connectivity throughout rural areas,” Ingle said.

“It is a distinct need that was basically amplified once we started doing virtual learning,” Chris Greene, Director of Information Technology and Network Services, said.

Board members agreed to help Trenton Telephone Company, by providing letters of support.

The Board also heard an update from Director of Special Programs, Susan Reyes.

The largest eligibility for services is the Specific Learning Program, which represents 42 percent of the students with disabilities.

Ingle noted that Board of Education meetings in 2022 would continue to be held on the fourth Monday of each month, except for Nov. and Dec. The board will release and approve the list of the year’s scheduled meetings during next month’s meeting.

The Board went into executive session to discuss personnel and property matters. The board approved the retirement of Edna Moore and Suzanne Smith, and the resignations of Cathy Canterbury, Amber Gilbert and Angela Dimos. The board approved Neal Shavers, Melissa Nestell, Heather Holder, Diana Spurgin, Brianna Fuller and Justin Spurgin for hire. The board approved the hiring of Darla Lingerfielt as a cafeteria staff member, Brianna Moore and Ruby Iles as substitute cafeteria staff, and Tara Riddle, Mandy McDaniel, Allison Lemke and Carolyn Hixson as substitute teachers.

The next Board of Education meeting will be Oct. 25.