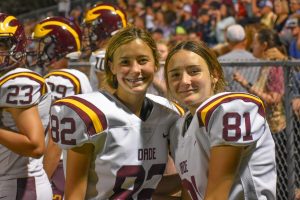 EDDY GIFFORD/Dade County Sentinel
Abigail and Caroline Tremmier, twin sisters and sophomores, are the kickers for the Wolverines football team, in addition to playing for the Lady Wolverines soccer team.

Twins Abigail and Caroline Tremmier, sophomores at Dade County High School, are sharing kicking duties for the Wolverines football team, proving that anyone can do anything, if they put their mind to it.

The Tremmier twins are both soccer players at DCHS. Their parents are Jonathan and Gretchen

Tremmier, and they live in New Salem. Football coach Jeff Poston was at one of the soccer games last year, and saw their performances.

“In a game, I had kicked the ball really, really high. After the game, he said, you two should be our football kickers. We thought he was joking,” Caroline said.

“She kicked one through the uprights. I thought if she could do that with a football, then we’re in business,” Coach Jeff Poston said.

“I thought it would be fun, so I convinced Caroline to do it. We do everything together,” Abigail said.

Poston was looking for kickers for this season, but was having trouble finding any. He had asked every boy on the soccer team, and no one wanted to do it. As far as he’s concerned, it doesn’t matter what gender they are, just as long as they work hard.

“We weren’t very good there last year. We missed a whole lot of extra points,” Poston said. “It was good to get them because they are pretty consistent, and they work hard, too. They spend all practice working on kicking extra points.”

Poston noted that Abigail and Caroline also attended a kicking camp on their own, as well.

“At our first home game, and our first game kicking, I kicked first, so I was super scared and nervous. But after that, it was easy. I helped her get through her first kick,” Caroline said.

“It’s different, kicking a soccer ball and a football. We have a lot of help though,” Abigail said.

The girls rotate for each extra point kick. They have both made all of their kicks, except for one of Abigail’s that was blocked during the game against Mt. Zion.

“It should have been an illegal play, but they didn’t call it,” Poston said.

Caroline and Abigail both said that yes, it is different being the only girls on a football team, but everyone is nice to them. In addition, they can count on a lot of support from the coaches, their teammates, and the fans in the county.

They both would like to continue to play throughout high school, if the opportunity allows.

“It makes it even more fun, knowing that I will always have someone beside me,” Caroline said.

“It’s super fun doing it, and it’s easier with Caroline because she helps me,” Abigail said.

“I am happy that they are here, I can tell you that,” Poston said.

“At one practice they came and told me that they got their nails done, so that was different,” Poston joked. “If they keep making extra points, then we’ll gladly pay to get their nails done.”