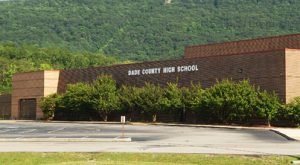 According to Sheriff Ray Cross, they received a call from the school’s resource officer, notifying them of the potential threat.

Someone had written on a bathroom wall in a girl’s stall that there was going to be a school shooting at noon. According to Dade County Schools Superintendent Josh Ingle, the restroom is considered to be a high-traffic restroom, located in a main hallway. A female student reported the writing to an administrator.

According to Sheriff Cross, officers were on the scene between 9:30 and 10 a.m.

“The schedule was not disrupted in anyway. Fortunately, the writing was discovered while everyone was already in the classroom. It was not during a class change. That is a good thing. Everyone was where they needed to be,” Ingle said. “It was also discovered early in the morning, so there was available time.”

At the school, officers got access to the camera security system, and looked at footage of everyone that went in and out of the bathroom. The investigators talked with several of the students.

“We stayed well after noon and nothing happened. We didn’t think it was a viable threat, but we take everything seriously,” Cross said.

According to Sheriff Cross, there are no suspects at the moment.

“I think it was just someone who was upset or having a bad day, or they just wanted to play a prank. We do need to find out who did it and they will answer as to why they did it,” Cross said.

Cross continued, “The investigators are still communicating with the school to see if they can get any leads.”

“I am sure there has been instances like this across the country, but when you look at research, most school shootings have not been carried out by female students,” Ingle said. “Through our safety training, if anyone is going to carry out something like that, we do not believe that they are going to announce on the bathroom wall. That was the red flag that led us to believe that we did not think it was a credible threat”

Ingle continued, “We took it very seriously, but nobody felt threatened, and nobody felt like their safety was at risk.”

According to Ingle, the school system has many resources for keeping students and staff safe. Each of the Dade County schools has an assigned School Resource Officer. In addition, each teacher and staff member has a Centegix safety badge. The lockdown system is all electronic, and directly connected to 911.

“Please talk to your children,” Ingle asks parents. “If they have information, they can report it to Mr. Fahrney, and their name and information will remain anonymous.”