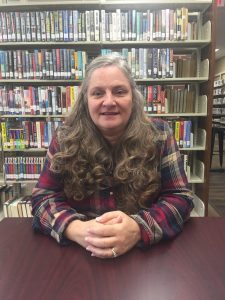 REBECCA HAZEN/Dade County Sentinel
Marshana Sharp has been the Manager of the Dade County Public Library for 19 years. She is preparing to leave the library for a new position within the community. A reception will be held at the library on Friday, for the community to be able to say goodbye.

Marshana Sharp is leaving her job as Manager of the Dade County Public Library, after 19 years of service to the community.

According to Sharp, she had not planned on leaving the library, but she had received several job offers, and she decided to take one, noting that she thought it was best for her.

The new job, which she has not announced yet, is in Trenton, and she says that everyone will still be able to find her out and about in the community.

Sharp says that some of her favorite memories as manager include the children, and watching them grow.

“I started out in the children’s program. I see them as teenagers now, or married. They tell me that they have fond memories of the library. That is my goal, to get children to love to read. It touches my heart,” Sharp said.

Sharp believes that the community needs the library in different ways, other than just for checking out books.

“We progress, and things change. Yes, people still read. But there are other things that we have now. The library is the heart of the community. It’s educational. It’s a media source. We have a recording studio. We have a photo center. You can transfer a VHS to digital. Now we have a scanner. We do anything we can do to help the community, to make it easier, more affordable,” Sharp said.

According to Sharp, her and the other librarians would make note of what people would come in and ask for, and then figure out whether it was possible for the library to become a resource for that.

“I always felt like this library belongs to the community and we have the privilege of opening the doors for them. We are told every day how much we mean to all of them,” Sharp said. “There has been a lot of joy.”

Sharp remembered an elderly woman, from many years ago, who was a frequent library patron.

“We were closed for a little bit, many years back. We had only limited services. She came up and said, ‘You do not know how important it is that you are opened back up.’ It was because she could not go to sleep unless she was reading. She couldn’t afford books at the time,” Sharp said. “I think I realized at that moment, what an important job we have.”

When asked what advice Sharp has for the next Dade County Public Library Manager, she said, “Listen to your patrons, what they need and want. Get out into the community, know your community.”

Sharp continued, “Sometimes there are a lot of decisions to make. You are making decisions for the whole community. Everything you do, you want to know if it’s going to be received well.”

There will be a reception at the library on Friday, Oct. 1, to say farewell. The community is invited to stop in at any time between 10 a.m. and 3 p.m. There will be cookies and lemonade.

Sharp was surprised and appreciative about the response from the community, when they found out she was leaving.

“No one would think that I’m shy, but I would just as soon do things and people not know that I do those things. Everyone that truly knows me, knows that about me,” Sharp said. “I appreciate the recognition, and it’s touched me. I’ve cried and cried. I just think I’m a regular person. I’m just doing my job. I don’t think I realized how much I meant to people.”

April Tinker, Library Assistant, said that Marshana is the best library manager that the Dade County Public Library has ever had.

“Marshana cares about this community, and she has a passion about it. We appreciate everything she’s done,” Tinker said.

In true fashion, Sharp said that she wants all of the library workers recognized as well.

“They are all on the front lines. They are the reason why I am able to do what I do,” Sharp said.

“I would love for everyone to know, since I won’t get to say goodbye to everybody, how much I appreciate all their support, their friendships, their smiles, and sticking with us for all the rough times,” Sharp said.