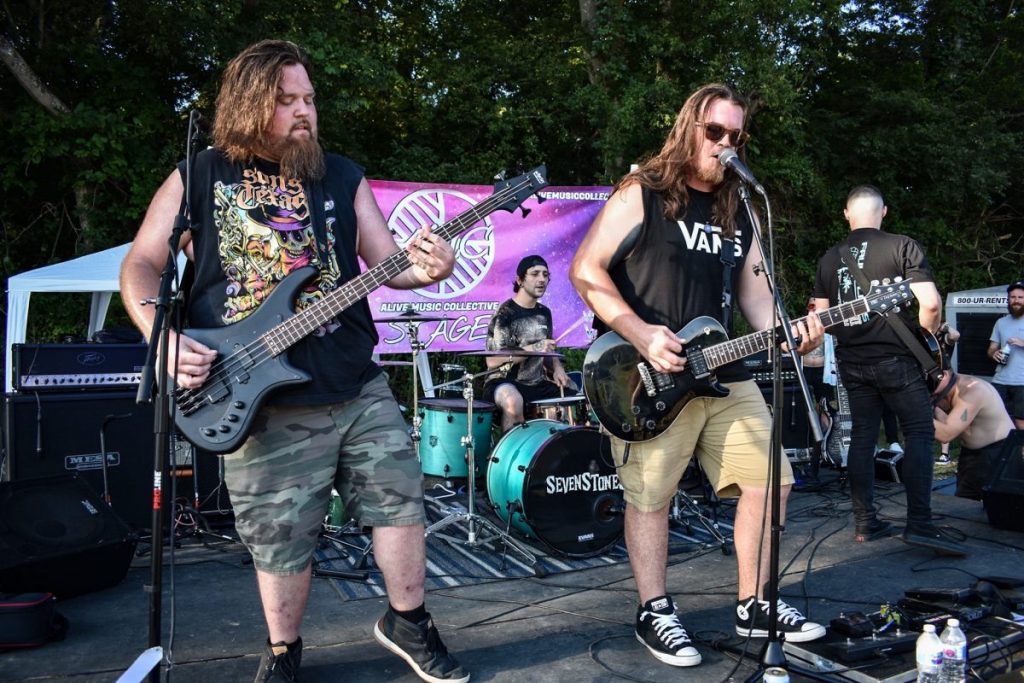 Photo courtesy of Valley Vibes Facebook page
SevenStones, a band from Chattanooga, played at this year’s Valley Vibes Music & Arts Festival. Co-founders Adam Gann and Nate McDaniel said the event was a success, and they are looking forward to planning for next year.

Valley Vibes Music & Arts Festival, held in Wildwood over Labor Day weekend, was considered a resounding success, despite some setbacks during the planning process.

Nate McDaniel and Adam Gann, co-founders, are both Dade County natives. Last year, the festival was held in Walker County, but McDaniel and Gann both wanted to bring the event home. This year it was held at Bella Sera Venue.

“It was a resounding success,” McDaniel said. “Everyone had a great weekend, and everyone was kept safe. We broke attendance records and we broke website traffic records. We couldn’t have asked for much more. We are pleased.”

The main difference between holding the event in Dade County versus Walker County was the level of government needed in the planning process.

“Last year was pretty cut and dry. We spoke to county officials maybe once or twice. We were able to get alcohol no problem. We noticed that there was a lot of red tape involved doing it this year. They made it tough for us, but I don’t think there was any bad intent behind it,” McDaniel said.

About five months ago, McDaniel and Gann appeared before the County Commissioners and asked for an amendment to an Alcohol Beverage Control ordinance, so they would be able to sell alcohol at the event.

“They wanted us to preemptively fill out this 17-page document, and each page had to have several attachments. We were handed that the Monday before the event, and there was no conceivable way that we could have met all of those requirements in time. And they still had not passed the amendment to the ordinance at that point,” McDaniel said. “We were extremely disappointed that we couldn’t find an agreement to sell alcohol this year.”

Even so, McDaniel and Gann hope to continue to hold the festival in Dade County in the years to come.

“A lot of the concerns that the officials had, they just weren’t present. I hope that goes a long way as proof of concept,” McDaniel said.

“We feel that things went smoothly. There was no problem with traffic and there were no incidents on the property. Hopefully our willingness to work with the county and the commission proves that we are not here to disturb the peace. We want to be professional about it. We hope that shows, and we won’t have much of an issue next year,” Gann said.

Gann continued, “We were worried about bringing a festival into Dade County, but the public was very happy about it and supportive.”

Attendance was boosted significantly from people who had originally planned to attend Bonnaroo, which was cancelled. It is estimated that well over 1,000 people were at the event.

“The Sheriff’s Office really came through for us. We have nothing but praise for them. Traffic could have been a nightmare, but we had free-flowing traffic all weekend,” McDaniel said.

Gann noted that there was a lot of fear, and misjudgment about the Bonnaroo people and what they would possibly bring to Dade County.

“The Bonnaroo people, most of them ended up paying full price, and helped us set up the event. They helped us with literally anything that we needed. They also helped clean up. They came and had a great time and lifted our numbers up. That fear for next year should be put aside,” Gann said.

Originally, Valley Vibes was set as the same weekend as Bonnaroo, to offer a local alternative. Going forward, Valley Vibes will still be held in September, and Bonnaroo will go back to its regularly scheduled time in June.

“Our strategy definitely changed in that regard. We have had dozens of people say they were going to come back next year,” McDaniel said.

According to McDaniel, there was a surge in traffic at local businesses during the weekend. In addition, local campgrounds in the area also received extra business, because those who planned on attending Bonnaroo, and ended up at Valley Vibes instead, needed local places to stay when Bella Sera ran out of RV space.

“A lot of people were dumbfounded that this even existed. That was the most common thing I heard,” McDaniel said. “I didn’t hear a single piece of negative feedback.”

“Everyone said our parking situation was excellent. There was never a backup. The one lane road wasn’t an issue. Everyone loved the music. A lot of people found a lot of cool bands that they had never heard before,” Gann said.

Donations for the Tri-State Food Pantry were also collected during the event, as well as donations for a scholarship fund for the Dade County bands program.

McDaniel and Gann are already thinking forward to next year’s event.

“We are going to do some really cool stuff next year. We are talking about doing a one-day event in the Northshore area in the spring, which would boost exposure for the event in Dade County in the fall. It’s going to be a crazy success next year, I think,” McDaniel said.