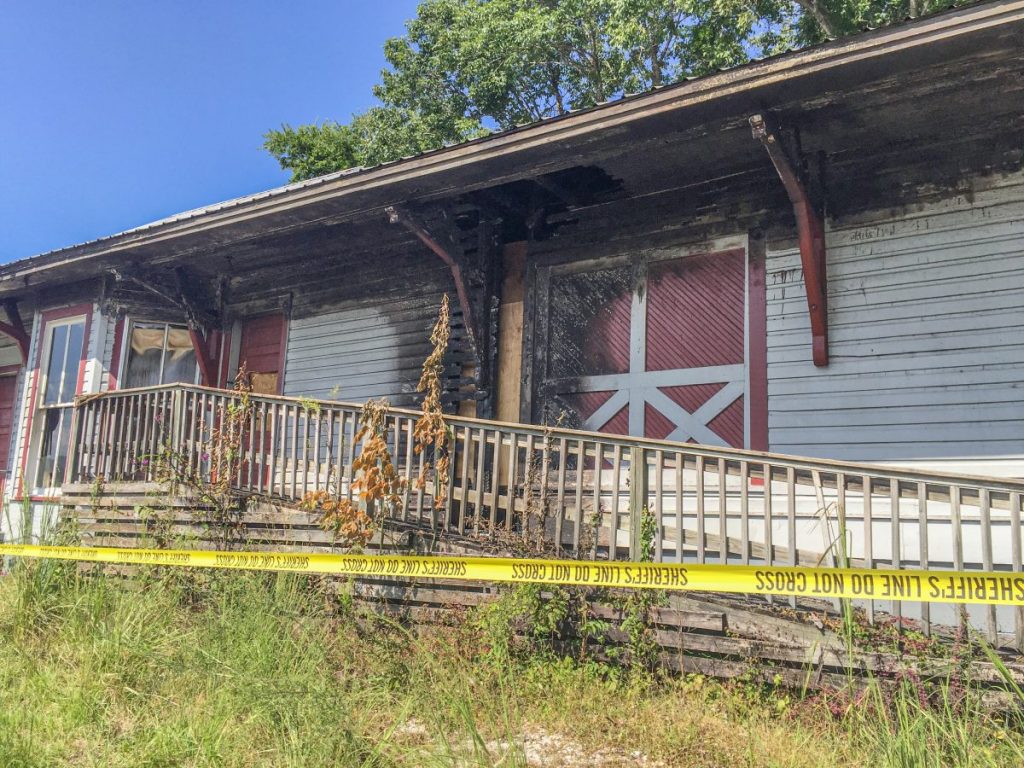 REBECCA HAZEN/Dade County Sentinel
A $10,000 reward is being offered for information about a fire that was intentionally set at the historic train depot. Firefighters responded to the scene at around 2:30 a.m. on Wednesday morning, Sept. 1.

A fire at the old Trenton train depot in the early morning hours of Wednesday, Sept. 1, has been determined to be arson.

A reward of up to $10,000 is being offered by Georgia Arson Control for information that leads to the arrest and conviction of those responsible.

The Trenton-Dade Fire Department was dispatched to the building at 90 Railway Lane at around 2:30 a.m. Engine 16 was the first apparatus on the scene.

Smith said that the fire was suspicious because the fire was located outside, all the doors were still padlocked, and no windows were broken.

“The first apparatus on the scene got a quick knock down and stop of the fire within five minutes of the scene,” Smith said.

Smith continued, “Most of the water was contained to the outside. There is minimum water damage inside, mostly just smoke and heat damage.”

“The fire originated on the ramp leading to the front door on the exterior of the building,” Insurance and Safety Fire Commissioner John F. King said in a press release. “The structure was being remodeled. Anyone with information about this Dade County fire is invited to call my Fire Investigations Unit at 1-800-282-5804.”

“It burned up in the attic pretty heavily. We will have to have a structural person go in and look at it and give us an idea of what it looks like it as far as repair. It hasn’t sagged or anything like that, but the beams are all charred,” County Executive Ted Rumley said.

According to Rumley, there are intentions to turn the building into the new Board of Election’s Office.

“The building was empty, just new materials that we had put in. We had been putting a lot of time into it in the last few months,” Rumley said.

The depot used to be the city’s Bicentennial Library, which opened in 1976. The building at one point also housed the Chamber of Commerce office.

Explorers Get Hands On Experience