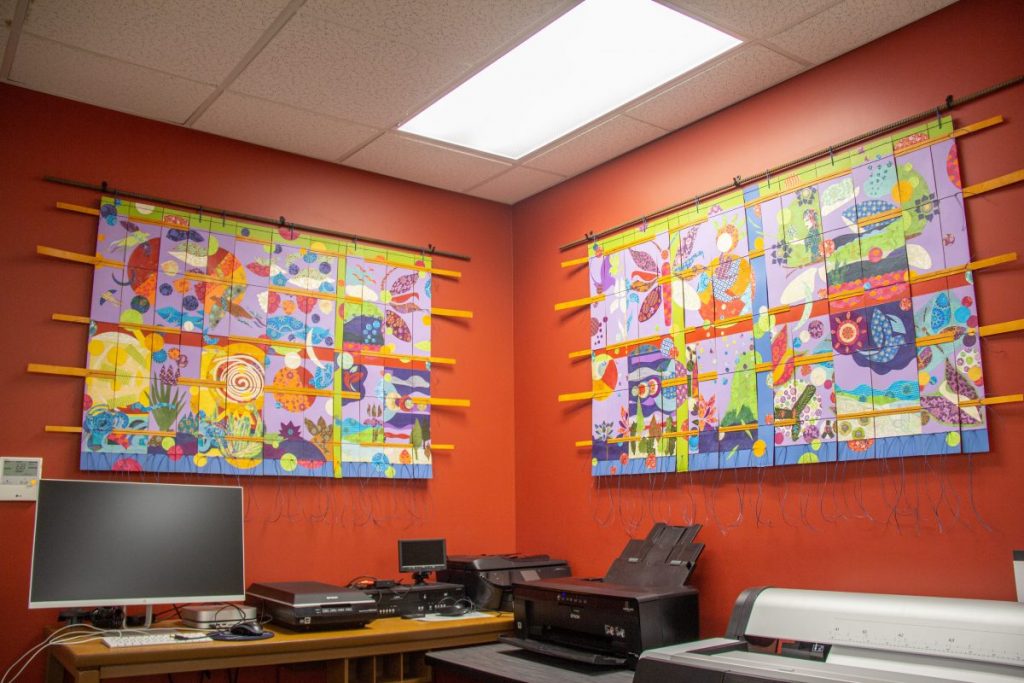 Throughout last February and March, Anna Carll and Claire Vassort, part of the 2CREATE TEAM, held classes on paper collage and silk painting at the four libraries within the Cherokee Regional Library System, part of the Art4Libraries program.

Carll, from Chattanooga, guided and helped community members make paper collages for the libraries, in a project called “Collage Your Way.” Vassort’s project was “The Silky Way.”

The Lyndhurst Foundation and Georgia Council for the Arts funded the program.

The collages have now been installed at the Dade County Library. The silk banners were hung in the library earlier this spring.

Carll’s theme for the paper collage classes was “hope, healing and rejuvenation,” which she thought would be uplifting because of the on-going pandemic.

Carll’s prompt for the project was that everyone had to include a circle in their design. She created templates of other shapes and images that the class could add to their collages.

When the project was completed, Carll photographed everyone with their finished collages, so they would have a record of their whole piece. Then, Carll cut each of the finished collages in half, and the pieces were weaved together into columns.

“I kept everyone’s collages at least half intact so they could recognize their pieces. I had to do a reconciliation process. Once you displace part of it, it doesn’t necessarily line or up make sense, so I went back in and add some things back in. Then they started flowing together into a community mural.

It was very involved once I got it back to the studio. It took me almost a month for each installation,”

Carll said. “I was completely floored by how they came together, and everyone else was, too.”

Carll got her start in graphic design and illustration. While living in Atlanta, she started taking evening painting classes.

“I took to that. That started me on the fine arts road,” Carll said.

She became a full-time artist in 1999, and moved to Chattanooga in 2013. She has primarily been showing her paintings in galleries and selling to the private market.

In addition, she was part of the local art team that worked with Meg Saligman Studios on the large M.L. King mural on the AT&T Building in downtown Chattanooga.

“One of the reasons why I moved to Chattanooga is because it has a lively art scene,” Carll said.

Carll and Vassort were at a City Creators Program, which was a program to get artists involved in potential public art projects.

“I had an epiphany. What if I paired up with Claire? I contacted her, and asked ‘Would you be interested in forming a creative strategist team,’ and she jumped on it. That is how 2CREATE TEAM was born. We work really well together. We had a lot of the same ideals. She came to me with the Art4Libraries idea,” Carll said.

Carll thinks that the Art4Libraries program was important because it brought art education and exposure to people that may not have gotten it in schools.

“Art funding in schools is the first thing that gets chopped. When I was a kid, back in the 60s and 70s, we had all kinds of art programs available. I have seen this decline over the decades,” Carll said.

Carll continued, “They got to experience a collaboration with me, where I took their work and cut it up and changed it around to show them that this is what your work can evolve into. I think it was a rich experience all around.”