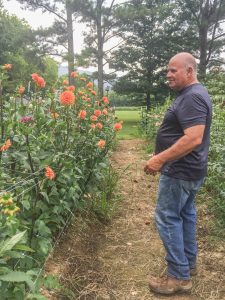 REBECCA HAZEN/Dade County Sentinel
Ernie Ponder checks on his dahlias in the backyard garden. They require daily care, such as deadheading and disbudding.

In Ernie Ponder’s backyard in Trenton, there is a large patch of dahlia flowers, all in different colors and sizes. He enjoys the work that goes into caring for them, and he likes having the opportunity to share them with the community.

Ponder doesn’t sell the blooms. Instead, he gives them away to community members.

“I give them away mostly. Every Sunday morning before church, I pick a bunch and I take them to the different churches. It has brought me a lot of pleasure. It is an enjoyable pastime,” Ponder said.

Customers at Ponder’s Mountain Pharmacy on Sand Mountain, run by Ponder’s daughter, also get a dahlia with their prescriptions.

“About two years ago, a friend of mine, Herbert Pace, came into the pharmacy. I was telling him about a lot of things that were going on. He said, ‘Ernie, you need something to take your mind off of all that,’” Ponder said.

The next week his friend brought 52 dahlia tubers (bulbs) and explained to Ponder how to plant them.

“They did really well. As a matter of fact, they did so well that I won first place in the amateur division at the American Dahlia Society Chattanooga show. That really did it,” Ponder said.

After that, the number of his dahlias grew. Last year, he had 225 tubers.

“I was looking forward to the show, but there wasn’t one because of covid. So, I just enjoyed them last year. This year I really want to do well. I have over 500 now,” Ponder said.

According to Ponder, there is a lot of work to take care of the dahlias. They have to be continuously weeded, and they have to be fertilized. Each day, he deadheads the withering blooms. He also disbuds, which is pulling off the little limbs.

“If you don’t disbud, you wind up with small flowers. You pull off little limbs and it concentrates the energy to making a bigger flower,” Ponder explained.

The tubers need to be stored in either sawdust or peatmoss throughout the winter. Planting occurs around the middle of April, and the tubers are put about six inches into the ground. The plants are not watered until they reach six inches high. Once that happens, then they need to be watered regularly.

“You just watch them. You learn as you go with these things. When you have as many as I have, it becomes a little difficult, but I try my best,” Ponder said.

The dahlias will continue to bloom until the first freeze. After that, the plants are cut down to about four or five inches, where they will stay like that for about two to three weeks. Then you pull the plants up, and you take the tubers off the plant. They will be stored again for the winter.

“If they get too dry, they are no good, but too much water and they will rot,” Ponder said about the tubers.

Dahlias are also sorted in to size classes. The largest ones are AA, the next biggest is an A, and then they go into B and BB classes.

Ponder is a member of the Tennessee Dahlia Society, and he says he really enjoys being a part of it.

“You have a lot of like-minded people who really love flowers coming together,” Ponder said. “This year in our society, there are 43 people. This year, I had the first bloom that came out. That made me feel real good.”

“I come out here, and I look out, and I have a big smile on my face. It requires a lot of work, but some work you enjoy,” Ponder said.