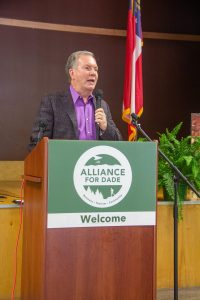 David Carroll, long-time news anchor in Chattanooga, spoke at the Alliance for Dade’s lunch and learn event on Thursday, Aug. 5.

“We are trying to be active in our community and get involved in a number of things. Work force development is number one on our priority list right now. You will be seeing some things coming from us about that,” George Williams, Alliance for Dade Chair, said at the beginning of the event. “Thank you for being here. If you’re not an investor, we’d love to have you be a part of our organization.”

“He has done this community so well, and I am talking about the tri-state area. He is truly a local boy. We thank him very much for what he does. In a world of fake news, David Carroll is genuine,” Stone said.

Carroll has won recent awards such as Best Humorous Column of 2020 from the Alabama Press Association, a 2020 Edward R. Murrow award for hard news reporting.

Before starting his television news career, Carroll was a Chattanooga radio announcer, beginning at WFLI.

Carroll grew up on Sand Mountain, and spoke about his memories, past and present, about Trenton and Dade County.

“I love Trenton. I love Dade County. There are so many familiar faces,” Carroll said. “If there is anything I want you to take away from today, you all shouldn’t take Dade County for granted. You have something special here. You have been given a gift of a wonderful place to live.”

Carroll reminisced about places, including his first haircut, which is now the location of Lalitos. He remembered that he opened up his first bank account at the Bank of Dade, money made from pumping gas at the family store in Bryant, Ala.

He remembered places that are now gone, such as Wright’s Restaurant, Dixie Cream and the Deli Dipper. He also spent a lot of time at Price Pharmacy.

“When I was a kid, Price Pharmacy sold records and magazines. The first record I ever bought was “Sweet Caroline” by Neil Diamond, at Price Pharmacy,” Carroll said.

Carroll also spoke about Cloudland Canyon, and said that he tells everyone to go and hike the Waterfalls Trail.

“Every time I have had a serious life decision – getting married, changing jobs, anything of any magnitude – I sit on a big rock half way down the hike to the waterfall. I take a notepad and I make a pro and con list, in the solitude of Cloudland Canyon. It has never sent me in the wrong direction,” Carroll said.

Carroll also noted that he was the first one to put the Forester Sisters on TV in the 1980s.

“These four young ladies said they were going to make a record. There was something so special about them, and they were sweet and genuine, and sounded like angels,” Carroll said. “How cool is it to be from the same county that produced the Forester Sisters.”

Remembering the 2011 tornados, Carroll said that he believes that Trenton, and Dade County, rebuilt faster than any other community.

“When this devastating storm came though, Sheriff Cannon, former Sheriff Street, and so many others put their personal losses aside and put the community up and running again. It was inspiring. Dade County didn’t wait for someone else to hand them a solution,” Carroll said.

Carroll also spoke about his new book that is coming out soon, “Hello Chattanooga, the Famous People Who Have Visited the Tennessee Valley.” The 600 page book features over 200 photos and lists famous people who have visited the Chattanooga area since 1900. These include Billy Graham, Winston Churchill, fifth president James Monroe, and more recent musicians such as Kane Brown and Lauran Alaina.

Superintendent Josh Ingle, as well as Board of Education members Carolyn Bradford and Dr. Jayne Griffin, presented Carroll with a certificate of excellence.

“David Carroll has been doing the School Patrol at WRCBtv for a number of years now. Any time that he has reported on Dade County Schools, he has always been very fair. He will always give us a call,” Ingle said.

At the end of the lunch and learn, Williams recognized Kathleen Reed, who has recently resigned from her position as Immediate Past Chair. Williams presented Reed with a certificate to thank her for her work.

“When we lost our chamber of commerce, she pulled things together. Her dedication, hard work, and community mindedness and leadership helped us to get the Welcome Center started up. Our goal was to get the Alliance get back going again, and we started those meetings last late August. She was the first chair of our board. We’re going to miss you,” Williams said.

“We continue to grow. This is a spring board out to something good and better. I see great things ahead for the Alliance,” Reed said.