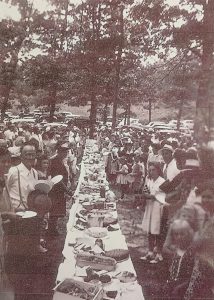 The singing event has been held before 1921, but 1921 was when it became an annual event.

“We are three of the few, of about a half dozen, that has been coming to them all of our lives,” H. A. McKaig said.

“We are descendants of family of founding members,” Bradford said.

According to H. A. McKaig, the event started with shape note music. Shape notes became a popular way to teach in singing schools. Shape notes were learned more quickly and easily.

“Shape notes will be on the same line and pitch but they have a shape to them to make reading them easier. People who are really good at shape notes, they can sit down with a brand new song book and go on singing the song. It began being taught in the south in the early 1900s, maybe before,” H. A. McKaig explained.

People in New Salem were taught shape note music in the early 1900s. At that time, the Episcopal church was the only church in the area. At that time Highway 136 wasn’t even there.

“This community was cut off from Trenton, pretty much. The people wanted to sing and wanted their kids to sing. They brought in people to teach shape note music,” H.A. McKaig said.

H. A. McKaig continued, “My guess is, why it is in August, is you weren’t planting and weren’t harvesting crops in August.

“For years growing up, we would have a singing school for two weeks, and it would be just before the All Day Singing, so everyone would be fresh,” Robert McKaig said.

During the event, attendees will sing out of the Red Back Church Hymnal. According to redbackhymnal.com, the book was first printed in 1951, and has 410 songs.

“It is printed in the seven-shape-note format. Today, it remains one of the few hymnals using this unique style of notation,” according to redbackhymnal.com.

“That hymnal has been around a long time. There is a reason why it has been survived. There are a lot of good songs in that book,” H. A. McKaig said.

The All Day Singing will comprise of individuals and groups doing performances, with congregational singing in-between.

Pastor Reece Fauscett will speak a short sermon starting at 11 a.m. There will be singing until 12:15 p.m., when there will be time for lunch. Singing will continue after lunch and go on until people decide to stop.

“Whoever shows up will get a chance to perform,” H. A. McKaig said. “Just be ready to come and sing.”

“Local performers will be in attendance,” Bradford said.

Since then, the number of attendees has dwindled, but they are hoping for a good crowd this year. Last year, during the pandemic, they held the event outside, and they had a good turnout.

“When I was a kid, this building was full. They had to bring out chairs to line the walls. The windows would be open, and there would be people sitting out on the lawn under the shade trees,” H. A. McKaig said.

Over the years, the All Day Singing has spawned many local performers.

“Sharon’s daddy taught singing schools all over the southeast. Her uncle sang with a lot of big groups back then. He and Lee Roy Abernathy had a TV show in Atlanta. Mark Gray spent most of his childhood in this church and went on to sing with Exile. He and J.P. Pennington wrote most of Alabama’s first album. The Forester Sisters, they grew up in this church, and for about 12 years they were about as big as you could get in country music,” H. A. McKaig said.

The community members and attendees of the All Day Singing are looking forward to the 100th anniversary.

“It’s not necessarily a United Methodist Church thing, it is a New Salem thing. The church has been privileged to host it all this time,” H. A. McKaig said.

“We are trying to make it special this year, and we are focused on the history of it, the folks that did it before,” Robert McKaig said.