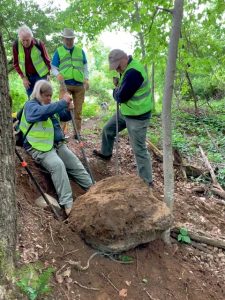 “We are here to support the park in helping them maintain the trails, educate visitors, and being a help to the park in any way that we can be. We are an unofficial support system to the rangers and the Interpretative Center,” President Juanita Wade said.

On-going work right now includes treating hemlock trees against the invasive woolly adelgid, and relocating a trail near the Meadowlands section of the park. Another project is reviewing the organization’s mission, and determining if it needs to be changed in any way.

There is a monthly work day, the second Saturday of each month, that volunteers meet together and they pick a particular area to work on.

“We’ve got 64 miles of trails in this park,” Vice President Jim Wilbanks said. “We have volunteers who have adopted each portion of a trail. It’s your responsibility to walk it every couple of weeks to make sure nothing has fallen across it, and to work on erosion and other issues.”

“During COVID-19, our trails team was one of the only things that we could do. They are active, organized, and will work on days that are not scheduled. They are a definite strong support,” Secretary Bonnie Cayce said.

Other things that the volunteers do are manning the Interpretive Center, to keep it open on weekends in the winter, and removing graffiti from signs.

“What we do has a real effect on the environment, but it also feels good, keeping this place as special as it really is,” Wilbanks said. “It’s all about supporting the park and making it the quality experience that it is.”

This year, the group is focusing on getting more local community involvement.

“We want kids, we want families, so they are seeing the park from a different point of view and they are making that investment,” Wade said.

“Certainly since I have lived in this area, I have seen a difference in community involvement. I remember a time where I would ask my students if they had been to Cloudland Canyon, and a lot of them would say no. Now I see them out and about. I see people from way out of town. I believe our community is more receptive now,” Cayce said.

Hayrides will be brought back in October, in addition to Your State Parks Day, which is the fourth Saturday in September. At that event there will be volunteer projects ongoing within the park. That is a free admission day for volunteers.

“The state cannot hire enough people to do what needs to be done in all these state parks. It couldn’t be done without the volunteers,” Cayce said.

Wade, Cayce and Wilbanks all joined FOCCSP because they wanted to be involved in something meaningful, in addition to getting the chance to volunteer at a park that they love.

“I came here as a child,” Wade said. “I remember playing on the playground because we had family reunions here. I’ve brought my daughter here, and now she brings her daughter. As an adult, it has taken on a whole new meaning to share it with so many other people.

“My grandkids love it,” Cayce said. “Every time they come we do something at the park. My daughter was raised here.”

“Bonnie invited me to begin with. I met a group of folks my age that are out and about. I wanted to be involved. It’s a really worthwhile thing,” Wilbanks said.

Wade, Cayce and Wilbanks all noted that the park staff, including the manager and assistant manager, are all hardworking, but they are all so busy. That’s where the FOCCSP members step in.

“We want to take the load off of park staff and we want to make the experience richer for the visitors,” Wilbanks said.

Wade noted that each time Cloudland Canyon State Park is at any type of conference, they usually win an award.

In fact, Cloudland Canyon State Park Manager Brad Gibson won Manager of the Year last year, for the state of Georgia, and the housekeeping staff was just recognized, too.

FOCCSP have also been asked to do a presentation at the State Friends Leadership Conference in August about their involvement with community.

“Out of all the state friends groups, there are some that have two or three people, and we have at least 20 to 30 active members,” Wade said. “They look to us to see what we’re doing and how we’re doing it.”

In addition to Wade, Cayce and Wilbanks, the board members for 2021-2022 are: Gary Holsted, Treasurer; Dena Abell, Membership; Lisa Arnold, Communications/Social Media; and Amanda Sharp and Mark Issenberg, Members at Large. Bob Venable is the Past President.

If anyone is interested in joining FOCCSP, there is a monthly meeting the fourth Thursday of every month.

“Coming to that meeting, that is your best way to connect and meet other members,” Wade said.

One incentive for becoming a volunteer is that, after 60 hours within a year, the volunteer gets a free park pass.

For those that cannot afford to come to the park, Wade reminds the local community that the Dade County Library has free state park passes that can be checked out.

“We use the website for registering our volunteer hours. Those totals go to the state. The state reimburses us financially, not a lot, but some. We have been able to amass some money that we have been able to use for some projects, including the new sign as you come in from the highway,” Wilbanks said.