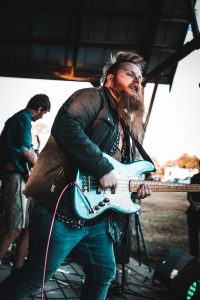 The first Valley Vibes festival was held at Jenkins Park in 2019. Last year’s event expanded and was held in Walker County.

McDaniel and Gann both grew up on Sand Mountain and knew each other as kids.

“I went to the University of Georgia. I was a TV producer for a while, and one day I pitched the idea of a music festival to him. He was having pretty much the same idea,” McDaniel said.

“I played music all throughout high school, went to college and got a business degree, and realized that I wanted to pursue music. I moved into a house in Trenton with my band. We toured, we played shows and shot music videos. Just like Nate said, we had this underlying thought that we always wanted to do this big festival,” Gann said.

The first Valley Vibes festival featured a full day of music with 22 bands on two stages.

“The coolest thing about Valley Vibes, going back to the first one, it was all done by us, a team of local musicians. We funded it ourselves, set up everything ourselves, even during the second year. We worked basically 24/7, to make sure everything went smoothly. We even cleaned up the place afterward,” Gann said.

This year’s Valley Vibes Music & Arts Festival, will have 100 acres of space to use at Bella Sera Venue, which is a new wedding venue. There will be 50 bands on three different stages.

Bands from all genres of music will perform, including country, bluegrass, pop, rock and heavy metal.

“We love all the bands in our local area and we want everyone to be represented,” McDaniel said.

“It’s a little something for everybody,” Gann said.

In addition to the music, there will be about 50 art vendors, wrestling and movie screenings.

“We have a plethora of different things,” Gann said. “We will have people blowing glass, doing wood carvings, oil painting. We will also have food vendors.”

A day pass is $40, and a three-day pass to the entire event is $60. There is also a VIP pass for $120, which gains access to a private campground, perfect for RVs. Everyone is encouraged to bring camping supplies and stay the night.

McDaniel and Gann wanted to schedule Valley Vibes over Labor Day weekend, to provide a local alternative to Bonnaroo, held in Manchester, Tenn., which is sold out.

Gann and McDaniel are ensuring everyone’s safety by providing signage, clearing out an easement so that people can exit properly, and hiring people for traffic maintenance. Carpooling is encouraged.

“There is a lot going on behind the scenes to make sure it is safe to get in and out of the place,” McDaniel said.

“Dave and LeAnne over at Bella Sera, they have been awesome. They are great people to do business with. Looking forward to that wedding venue getting going,” Gann said.

All proceeds from the first Valley Vibes event, in addition to donations, went to the Tri-State Food Pantry.

“We continue to support them to this day,” McDaniel said. “We will have a non-perishable food drive, and we will monetarily donate to them at the conclusion of the event.”

They have also set up a scholarship fund for the Dade County bands program, which can be donated to.

“We are both products of the Dade County bands program under Mr. Chance, and we want to help them out in any way that we can,” McDaniel said.

Gann and McDaniel are hoping they will be able to sell alcohol at the event, pending an amendment to an ordinance. There is also currently an amendment to the parades and special events ordinance, in the process of being voted on, which would include events on private property. These ordinances will be discussed and voted on during the County Commission’s next meeting on Thursday, Aug. 5.

“We encourage everyone to go to the meeting on Aug. 5. We just want folks to come out and be informed. This would have a wide ranging impact on folks in the county, and we just want their voices to be heard,” McDaniel said.

For more information, and to purchase tickets, visit Valleyvibesmusicfestival.com.