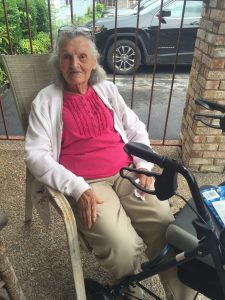 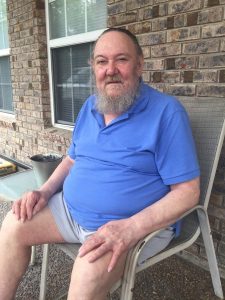 Senior citizens, originally living at Woodhaven Senior Living in Trenton, are adjusting well after being moved to Mary & Martha’s Personal Care in Rossville.

Kent Allen Womack, owner of Woodhaven Senior Living, was arrested on June 14 with one charge of cruelty towards the elderly, after it came to light that the senior citizens were living without air conditioning.

Womack told the residents that they had to pack their things and be out of the facility that day. There were nine residents living there at the time.

Six of the residents now live at Mary & Martha’s Personal Care. One of the nine, a 97-year-old man, passed away the Friday after Womack’s arrest.

Ethel Cody, 93, was at Woodhaven Senior Living for over a year.

“I liked it at first, because I had never been in an nursing home before. It was okay, I thought. And then, it got hot, and we could hardly breathe. There were no activities,” Cody said.

According to Cody, the residents did not get much to eat, either.

On the day that the residents left, Cody said that she was asleep, was woken up, and told to get ready to leave.

“I called my daughter and she came and got me. They called a bus and sent us up here. I reckon they had this place ready for us,” Cody said.

“The other place, Woodhaven, smelled a lot,” Cody said.

Nelson also said that the kitchen was in “turmoil” all the time, and that the staff often had to help with the cooking.

According to Nelson, there weren’t enough staff to clean, and the staff members were “quitting every time you turned around.”

“It stayed in a disarray,” Nelson said of the state of the building.

On the day that they were asked to leave, Nelson said that he couldn’t believe it, but he is now enjoying his time at Mary & Martha’s Personal Care.

“Miss Martha, [Martha Dawn, the owner] received a phone call asking us if we had any beds. Martha thought we were going to just get one or two people. We were under the impression that Kent was selling the place and he was trying to find placements,” Metcalf said.

According to Metcalf, the law is that living facilities have to give 30 days’ notice for new placements, so they thought it would be a week or two before the residents were transferred.

“We got a phone call from the Sheriff’s Department. It was an immediate vacate. It was all hands on deck at that time. We called third shift workers and got them to help. Once they arrived, we had Hearth Hospice here to provide food and get them settled in. It was a process, we were here until midnight,” Metcalf said.

According to Metcalf, all of the transferred residents are happy at Mary & Martha’s Personal Care.

“They all have air. We are more organized here. Meals here are nothing like they were there. They have a lot of activities going on here. When people come to a place like this, you just don’t want them sitting in their room. We try to keep them active,” Metcalf said.

Some of the recent activities included a cookout on the 4th of July, a birthday party, and bingo.

Metcalf said that when the residents first arrived, she realized that some of their medications were not being given to them regularly.

“Why was nobody seeing any of this? We are governed by the state of Georgia. I don’t know how this slid by for so long,” Metcalf said. “We have 10 days to correct a violation.”

Metcalf added, “They probably didn’t speak up for fear of retaliation.”

Things are quite different at Mary & Martha’s Personal Care, according to Metcalf.

“It’s far from what we do. We run a really tight ship here. We never neglect our residents. We have a good reputation here in Rossville,” Metcalf said.

Metcalf added, “We are blessed to have them.”